COREY HARRIS AND THE BLUES 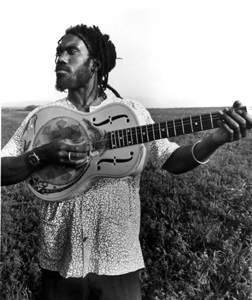 Corey Harris, a fine blues guitarist, songwriter and singer in a neo-traditionalist blues  style writes a provocative column on his blog  Blues is Black Music entitled 'Can White People Sing the Blues?" Harris, a musician specializing in a style of blues that's been around much longer than his years on this earth insists it's an important question. His primary objection to the idea of whites playing what is a black art form in origin is that while listeners find themselves entertained by technical competence and show business bedazzlement, they do not have legitimacy because the music is robbed of historical context and is, as a result, merely ornamentation, not art that convincingly  interprets personal and collective experience in a cruel, problematic existence. There is no culture without the long, collective memory to inform it and keep it honest,

" Without culture there is no music.  Music is the voice of a culture.  Separate the two and the music can never be the same.  Of course, it may be in the same style as the original, but the meaning of a song such as Son House's 'My Black Mama' will always be changed with a different performer.  This is especially true if the performer is not from the Black culture that gave birth to the blues."

I agree that those aspiring to perform blues, jazz or soul should be forever aware that what they are picking up is black music created by and defined by black artists and the culture, twisted as it may have been, that contained the forces that brought together elements of African and European tradition that otherwise would not have met. Would that the institutions that created the genius of African American music hadn't been the racist and economically deterministic demon of Slavery. Harris, though, assumes that culture is static and implies in his argument that black culture has remained still. The creation of what has come to be known as Black American culture with regard to art, education, literature, music, theater, speech, theology refutes that rather handily, as it arises, through forced circumstances, from a system of oppression.

The new black culture that gradually arose and developed as the response by black communities to the decimation of the institutional, social and spiritual traditions that had been theirs in their own land. The new culture, in turn, went on to influence the larger culture, the culture of white people. One can, of course, single  out exploitation, minstrelsy, racist practices, blatantly bad and watered down imitations of popular and emerging black art forms, especially musical idioms, but there is, indeed, the area of the personal, the localized, the influence of blues culture on white musicians quite apart from record companies, promoters, and agents where the younger musician is influenced and, in effect, being mentored by the black musicians they admired and took their cues from.  Harris makes a powerful argument that is based on a series of cherry-picked conceits to the exclusion of glaring contradictions. He speaks that the metaphysical essence of blues is feeling, emotion, the ability of the human voice to convey true experience , and yet he speaks in racial absolutes, denying the capacity of individual musicians, black and white, to transcend, mature, grow out of the imitative phase and achieve a true feeling, a true vision of the music they love. The case is that while self-righteous revisionist scolds like Harris is articulate is set to limit the range of blues to exclude all who are not black from having true blues authenticity, art does not sustain itself by remaining in a vacuum. No matter how righteous the argument as to who the music belongs to, without the constant input from musicians who are attracted to it and perform it according to their the narrative of their personal lives, the music ceases to grow. It shrivels up and dies and becomes only a relic that is notable mostly for how distant and antiquated it sounds.

I have always insisted that blues and jazz are black-American inventions and it's important to keep that fact in mind, but the blues, being music , is something that catches the ear of the blues lover , regardless of race, and speaks to those people in deep and profound ways, giving expression to perceptions, emotions, personal contradictions in ways that mere intellectual endeavor cannot; it is this music these folks come to love and many aspire to play, to make their own and stamp with their own personality and twists and quirks. That is how art, any art, survives, grows, remains relevant, certainly relevant enough for the born-again righteousness of Harris to reshuffle a less interesting set of arguments from LeRoi Jones' book "Blues People".There is the aspect that blues is something in which anyone one can play the game, an element that exists in any instance of arts one thinks ought to be restricted to particular groups, but what really matters is less how many musicians have gotten in on the game as much as how many are still on the playing field over the years, with great tunes, memorable performances, slick licks, and most importantly, emotions that are real, emphatic, unmistakable. Without real emotion, new inspiration from younger players bringing their own version of the wide and disperse American narrative to the idiom, there is no music. There is no art. It dies, falls into irrelevancy, and is forgotten altogether.
Posted by TED BURKE at 11:30 PM