Why Bob Seger isn't as highly praised as Springsteen is worth asking, and it comes down to something as shallow as Springsteen being the cuter of the two. In areas where we all say it counts--talent--Seger has it over Springsteen by huge margins; he's a far better singer (one of the most underrated in rock and roll), and he's a superior songwriter. It's not as if Seger hasn't had his dalliances with fads and pretentiousness, because I have enough old Seger albums to testify that his worst music is as misguided as the grimmest rock music ever released. But he's been a trouper, a constant tour-dog, a tireless professional and eternal journeyman who has always added more tricks and licks to his repertoire. The longer he played, the better his singing and songwriting chops became. Springsteen isn't a phony by any standard, and there's something likable about the guy despite the fact that I think his music is so much less than rock critics find it. His lyrics are occasionally interesting stew of impressions that are more muddle than the atmosphere, or even mood.

For all his musical fanfare, for all his verbosity and blaring dynamics, Springsteen has always seemed like someone who was at the brink of saying something memorable, only to choke. Seger, in mid-career, dropped any ambition he had to become the next Dylan and Beatles and developed a lyric style as natural and sweetly clear-eyed as anything Chuck Berry himself could have worked out. Seger continued to suffer from lapses of taste and inspiration, of course--remember that he never transcended his journeyman status--and produced some albums where he was witlessly trying to rewrite "Night Moves" over and over, proving nothing other than extended bouts of introspection didn't serve Seger well at all as a songwriter. Even so, it's not unfair to say that even with his aggravatingly erratic output, the best of Seger's work in a spotty career surpasses Springsteen's consistently middle-brow musings. 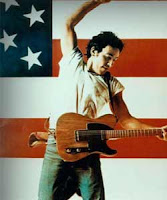 Seger did write "Hollywood Nights" in what sounds like a deliberate attempt to write in Springsteen's drive-all-night style, and it displays Seger's fatal flaw of trying to write in a voice other than his own. It sounds like The Boss, and likewise sounds crammed with so much pop-culture mythos that it winds up being mush-mouthed like Springsteen's grander attempts at significance.

Springsteen, though, has fared better when he pares back his excess and gives us some tub-thumping rock and roll; "Born in the USA" is a great song because it works on a strong backbone of a relentless beat, and The Boss sounds righteously pissed off; "Seger's epochal "Ramblin' Gamblin' Man" is the model for this, and I've no doubt other Seger songs --"East Side Story", "Persecution Smith", "2+2=?"--were on Springsteen's mind when it came time for him to write a song that was topical and pissed off. Seger hasn't been the most consistent songwriter of all time, but his best work--and there's a lot of it-- easily bests Springsteen's work for economy, punch, grit. Seger has often equaled the genius of rock and rolls masters Chuck Berry and John Fogarty in writing what actually constitutes the life pulse of rock; short songs, spiked and fine-tuned rage in the lyrics, and credible, riveting beats to make the two or three minutes memorable, cathartic, and infinitely re-playable.

Seger's strength as a lyricist is that he's not introspective and that what he has to say isn't hindered with club-fingered attempts at metaphor;unfortunately, Seger attempts poetry time and again, with laughable results, but his ability to recover these gaffes places him over Springsteen, who has not reined in his grating habits of poet-speak. Bruce takes too many paragraphs to say "ouch".

Each of this songs, rockers, and ballads, are notable for their lack of padding, filigree musically--there are no footprints of "grand music" here--and lyrically they are keen examples of the sort of lyrics Seger writes best and effectively, straight talk, unmarred by any reach for metaphysical density, in voice that is something along the lines of what William Carlos Williams had in mind when he spoke of the American voice. Again, I've already spoken to Seger's faults and inconsistencies as an artist (bloat and bad poesy have visited his muse more often than

I care to admit). But he's been superb much more of the time in his four-decade career, and his best work trumps Springsteen's output, which to me is the essence of poltroon mongering.

Where the trend had been for codgerly rock stars to give their careers a third act with the issuing of albums wherein they croak their way The Great American Songbook, graying Blue Collar Hero Bruce Springsteen goes the other way and releases an album of old folk songs. The search for authenticity continues, and the plain-spoken Springsteen--remember when each of his lyrics was interminable operas of intemperate desire?--sings it plainly, clearly, simply. No swelling melodies here, no subtle segues or seducing counterpoint.

The new folk album, some have said, is suitable for Bruce, as he was never a great melodist anyway when he was doing the songwriting. I'm not a huge fan of The Boss--it takes too much work to reissue the same objections, and after twenty-something years of bitching and groaning, I'm willing to maintain he's done music I've liked without embarrassment. Bruce Springsteen isn't Duke Ellington or even Burt Bacharach as a melodist, but that was never the point of his work since his sound is big, brash and in-your-face rather than, catchy, seductive or otherwise subdued with subtler chord selection. His music is equal parts rhythm and blues, Phil Spector, British Invasion and folk rock, with generous portions of Kerouac, Dylan and a wee tram of Whitman stirred into the mix. For the sort of blue-collar exhorting he does about love, death, being broke and struggling for a better future, Springsteen's melodies are exactly as they need to be; at their best, they work as well as anything a popular pop-poet has managed to do. When his work is contained and crafted, sufficiently edited, he's easily as good as Dylan as a melodist, the equal of Seger, the equal of John Lennon. I have found too much of his music overworked, grandiose and cluttered with the kind of business indicative of someone who hasn't found the central theme of what they're writing about; we see this in poets who compose at length, leaving no trace of a parse-able idea behind them, and one can witness it as well in novelists--Franzen, D.F .Wallace--who haven't in them to cut away the excess so the art may show. Springsteen has this problem as well, a habit of overwriting, and the effect in his longer, louder pieces tends to be a little Maileresque, circa the mid to late Sixties, where he keeps preparing to say something profound and yet the message is deferred. I prefer the punchier, grabbier, riff-based rockers he puts forth, or the terser, grainier ballads. The big band material he comes up sinks as fast as any Jethro Tull concept album has in the past. It's about songs, not the arrangements.

Springsteen singing old folk songs and protest songs interests me not in the least, although it might be a means for him to ease into the writing decent material for his next great period. Dylan landed into a profound late period, as did the Stones and certainly the quizzical Neil Young. Bruce would be a dandy addition to the grand pantheon of old guys. Productivity isn't, by default, a desirable trait. Talented artists can dilute their impact and lessen the esteem they've held in with the rapid issuing of mediocre, substandard or half-baked albums. Costello and Dylan are prime examples of this, although both songwriters frequently rebound with strong albums after some artistic lagging. There's an appeal for artists who aren't in a hurry to release product--I am a fan of Paul Simon's solo career (not crazy about Simon and Garfunkel music, which hasn't worn well) who has released albums at a snail's pace over the last thirty plus years; he's a careful writer, and his body of work is therefore rich with strong, moving, intelligently evolving music. His musical ideas work more often than not. The same may be said for Steely Dan, a band I've always admired for their consistent excellence for melody, production, oddball melodies and especially well-crafted lyrics. Being slow to release albums of late places Springsteen in honorable company.
Posted by TED BURKE at 11:19 PM
Email ThisBlogThis!Share to TwitterShare to FacebookShare to Pinterest
Labels: BOB SEGER, BRUCE SPRINGSTEEN