GREIL MARCUS WILL PUNCH YOU IN THE FACE 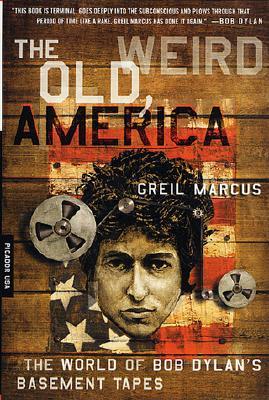 An admirable facet of Greil Marcus's digressive form of criticism is that he's always attempting--essaying forth, essentially--to demonstrate the unities between the high, low and middle portions of culture, insisting, with an impressive range of references and reading that the separations between are more argumentative than substantial. Linking mountain and southern music with Dadaism and neo-Marxist student rebellions with Religious bliss with rock and roll and performance art--an exciting project to stake one's career on, which is precisely what Marcus has done. Famously, though, Marcus, one of the first rock critics for the Rolling Stone publication, the author is given to digression and historical anecdote, musing and abusing the privilege of making metaphor when proofs of his theory are required. Assuming that he had a theory, to begin with. Marcuse is clearly moving in the dialectical mode, maintaining that opposing forces arise in history that then clash inevitably in the violent synthesis and create a new period of existence with new rules and cultural distinctions, all of that creating it's opposite and which will again clash in violent synthesis. But instead of a theory that one can read and argue with, that is, I suppose, a script one can comprehend and modify as new evidence comes to light, Marcus is more impulsive notion than theoretical rigor. It is the joy of reading him, as he seems to relish the chance to  recreate some blessed moment in music history--the Sex Pistols rehearsing "Johnny B. Goode" (in his book Lipstick Traces)  or the tension on the stage at the Newport Fok Festival when Dylan, assuming the stage with an electric band, was booed and called names by a crowd of stalwart folkies. Just when you think he's ready to provide the skeleton key to his musings, the punchline, the point he's taking a good while to get to, Marcus recedes into the mystify murk of his own grandiloquence. That is the joy and the aggravation of reading this writer.

I read Greil Marcus because I love the way he writes and admits that his prose has been an influence in the way I take fingertips to the keyboard. This is a problematic love of the man's love that has existed for five decades. Lately, though, it's been more prolix than persuasion, as his ongoing effort to make Bob Dylan the central factor of the 20th century hasn't struck a believable insightful note in decades. The Old Weird America is an extended reflection on the songs that appeared on Dylan's famous 'Basement Tapes", strives to provide the secret history behind the songs. In matters of the cross-pollination of cultures, racial justice, the mashing together of folk authenticity, rock and roll and Symbolist poetry, Marcus essentially argues that all roads lead to Dylan and lead through him as well. As criticism, it is more an act of imagination than a weighing of elements; Well read and as well listened as he is across a great spectrum of literature and music types, what is lacking here are the dual duties of establishing how the songs and artists within the folk tradition influenced Dylan and how Dylan assimilated the music who's expressive brilliance he could never equal and yet was motivated by to create his own means, and create a new criteria by which to discuss the success or failure of the work. Dylan is less the artist to Marcus than a saint or something greater, and, even though there is a pleasure to ride the waves, cadences and well-crafted metaphors and similes of the writer's prose, The Old Weird America is a shaggy dog story at heart. Marcus began this habit of epic digression with Lipstick Traces, a tome not without its pleasures--his connection thereof the efforts of Cabaret Voltaire, the Dadaists, Punk Rock and the Situationist provocations of Guy Debord was especially tightly argued-- but now it seems little else than a practiced spiel that's trotted out and exclaimed, regardless of the topic, not unlike an old timer's AA share that is memorized not just by him or her but by the entire meeting that has heard him or her deliver for decades. What I am saying is that Marcus is writing the same book with diminishing degrees of enthusiasm. His fascination with the idea that there is a Secret History of American culture, where ideas High, Middle and Low meet and create odd examples of genius and odd, clarifying perceptions to the exact set of ironies that both inspire and hobble us as a collective society striving for imperfectly stated Ideals has gone from an intriguing and seductive conceit where equally obsessed readers, hoping there is more to rock and roll and blues and country music than guitar chords and drunken hard times, can share the idea that there is a metaphysical aspect to the lovingly embraced sounds that defined the childhood of millions of citizens. This makes for diffusion of argument on Marcus's case, and leaves us more with bold assertion that is no longer the poetic effusions of a critic inspired toward a degree of inspiring interpretation; this is the point where the eloquence no longer rings, soars or makes you want to turn up the volume and study a lyric sheet while scrutinizing the tunes of Dylan, the Stones or the century's end disruptions of Hip Artists and those after them.

Rock has its own Harold Bloom, likewise an esteemed critic of literary works who, of late, is an admitted Bardolator who has written a number of books concerning the essential genius of Shakespeare as being something much more vast and profound and, shall we say "world creating" than even the wildest essayists have claimed in the centuries previous. Shakespeare, says Bloom, asserts Bloom, proclaims Bloom, created the Modern World, every inch of it, every concept, every psychological profile and alienated nuance we can think of. You can argue with his sweeping conclusions, but the book I'm thinking of, "Shakespeare and the Invention of the Human" is a critical delight. It may be that Bloom is luxuriating in the laziness of a higher caliber. The difference between them is that Bloom has a thesis that he's worked with for decades, a set of subtle arguments crystallized in his landmark book "The Anxiety of Influence", a brief but trenchant discussion where the Professor posits that Shakespeare is the premier genius who casts a long and permanent shadow  over the rest of world literature that came   before him and that his influence is so pervasive that no poet or other literary artists cannot help but be influenced by him. Those great geniuses who've emerged after Bard's time have either engaged their  influence from him and written great works extending, modifying and altering the system of metaphor Shakespeare changed our collective   consciousness with, or there are other genius who've emerged over the centuries who, being painfully aware of the Bard's embedded influence on how sentences about human experience have come to be written, write    furiously in the other direction, against his style, assumptions and rhetoric, experimenting, taking political risks, deconstructing, inverting, abstracting and de-familiarizing the artful language in  ways only a new kind of   genius would conceive and execute. But here's the rub: even for those great writers who've made great art with language that artfully  contains the human impulse to  go beyond mere descriptions of the world and peer at what is behind the veil of enumerated appearances, Shakespeare is present, his aesthetic, his metaphors, his language influencing new writers in one direction or the other. That is a rather crude summary of Bloom's basic premise and there are dozens of other notions woven through his life's work, but the point is that his a set of ideas that make the ideas tangible and convincing once the initial "aha!"  of flashing insight wears off. It's not science, of course, but it is a craft, a profession, this kind of thinking, and what we have in Bloom who has taken his working theory and tested it against new ideas, new writers who writer literature in cultures other what is routinely aligned in the Western Canon. Bloom, who defends the existence of the canon and wrote a book on the issue, believes dually that there are permanent genius and masterpieces of Western Literature,  as he is a man who has made a career judging books with imposing standards. The standards are not fixed, though, and Bloom further asserts Test the Canon is a living thing, like the   American Constitution, a category of books and authors that must be continually revised as matters with human existence come to mean something different. As I've mentioned already, Marcus hasn't put forth a thesis from which his notions can find a more compelling form of argument, a form that would aid others to avoid the frequent bush and thorny bramble that spreads in Marcus's many books and subject his scheme of rock music's claim to art to some respectful but rigorous interrogation. Marcus and impressionistic hot takes on matters of music, and culture, in general, have been brilliant at times, but the later work is actually regressive and without a central premise or premises. I frankly think he's lost in his thoughts but without a map.

The point here isn't to go over Bloom's declarations in, say, Shakespeare and the Invention of Human or Hamlet: Endless Poem , but rather to mention that as in the case of Greil Marcus we have a critic who has stared too long at the page, listened too long to the same old songs, two critics fixed on their respective catalog of ideas and conceits who are now not speaking to a readership, or at least no readership other than themselves. A pity, of course, since criticism, as practice, is to assert, offer proof of argument from the text scrutiny, and provoke discussion or at least some element of usefully invigorating intellection. Instead, possibilities are exhausted the critic's terms, not those of the book or the disc; I find that this kills enthusiasm for the art itself. I don't want to think about anything larger than what's for dinner after reading Bloom murmur through layers of verbal phlegm about the Absolute Appetites of Falstaff, nor do I desire to play air guitar or consider the sweet surrealist mannerisms of Tom Waits after Marcus intones multitudes of repetitively presented riffs, paragraph after paragraph. Those familiar with how the author thinks on the page will note, also, the lack of real verve in the writing, skilled and flowing as it may be.


____________________________________
BARRY ALFONSO: I fear this is an accurate reading of Marcus's book (which I have not read, though I've read Mystery Train as well as lots of Marcus in various publications). If The Old Weird America is a fun read in and of itself, well then I really don't care whether he gets his ostensible topic right or not. But I fear that Dylan's Basement Tapes songs -- probably my very favorite batch of tunes in Bob the Bard's catalog -- cannot stand the critical weight Marcus presses down upon them without collapsing into a batch of nonsensical shards. This IS Chicken Town, after all. I don't want Marcus confiscating the lace, if you know what I am sayin', brother.
Posted by TED BURKE at 11:17 AM
Email ThisBlogThis!Share to TwitterShare to FacebookShare to Pinterest
Labels: GREIL MARCUS