BUCKETHEAD WILL HURT YOU


I just popped Monsters and Robots out of the CD player, and the effect is exhilarating. There's fractured genius going on here, with all the metal / fusion/ funk / bluegrass cross over the boundaries so easily, and Buckethead's super-velocity guitar work punching up the action in ways that are sonic and lethal. Wow.  If Ornette Coleman were a shred guitarist, this is the full-kerrang sonic scraping he’d give the world that braved an audience with him. Transmutation Live is a must have, based on this. It's as if someone put your head against a wall and then slammed it with big red brick. There's a strong suggestion of Capt. Beefheart, with its disconcerting sci-fi lyric -scape and self-mythologizing, but this is the evidence that skilled pastiche is the dominant form .A mixed and borrowed bag of tricks it  may well be, but the unrelenting virtuosity , the unchained fury the musician brings to bear on this difficult assortment of styles rises Monsters and Robots the assortment of merely agile eclecticism that too often passes as music worth a dozen relistens.  Buckethead slices and dices the elements so well together that the channel-surfing dynamics make sense when the bits are linked, stitched and seared together with the speed-genius of the fret work.

Posted by TED BURKE at 10:36 PM No comments:
Email ThisBlogThis!Share to TwitterShare to FacebookShare to Pinterest
Labels: BUCKETHEAD

THE BALLAD OF PHIL OCHS 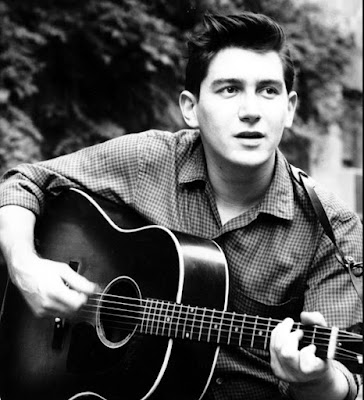 Strangely, bizarrely, and fantastically out of context, I saw Phil Ochs perform this song on a Cleveland dance TV show called Upbeat, hosted by a local DJ who was desperately trying to comprehend why Ochs, acoustic guitar in hand, was on a teen dance show along with a parade of bubblegum rock and pop-soul bands that performed bad lip-sync renditions of their regional hits songs. The DJ knew enough about Ochs to see that he was a protest singer by trade and mentioned that, with recent civil rights legislation and with the Paris Peace talks taking place in an attempt to end the Vietnam War, the otherwise gutless host said that Ochs might be out of a job unless he sang more upbeat tunes or words to that effect. Ochs just smiled and said he hoped for the best, and then performed “No More Songs” live on acoustic guitar. I remember this being one of the few songs that haunted me and continued to haunt me for decades.
At his best, Phil Ochs was stunningly brilliant as a singer and songwriter, especially as a lyricist and true poet. He was someone who could easily belong to the songwriter branch of the Confessional Poets like Robert Lowell and Sylvia Plath, writers of abnormal mental activity who were compelled to write their demons into verse in perhaps some effort to extract their awfulness from their souls. It has been suggested that writing is a species of self-medication, a means to alleviate distress without growing more robust and finding hope. It’s been recommended as well that this was a school of writing and a habit of thinking for which early death, either by one’s own hand or through the degenerative results of copious alcohol and drug abuse, was how a poet of this description achieved a reputation and legitimacy as a poet.
This was something that had repulsed me as I parsed 20th-century poets in college, my idea at the time being that one had to insist that art embrace life and affirm its vitality. I didn’t read confessional poets for years. Still, I came to a change in my thinking that effectively set aside my previous conceit that poetry, let alone any art, was required to advance anyone’s preferences as an arbitrary standard. Each poet, painter, writer, the dancer had to live up to that standard; the muse to create came from whatever source it came from, manifesting its inspiration in our personalities and our need to express our comforts and misgivings as creatures in this sphere of existence. It was under no requirement to make our lives better, let alone save ourselves from a wicked end or at least the bad habits that can make lives sordid, squalid endurance contests. Everyone is different, everyone has their story to tell, everyone’s fate is their own and no one else’s. Most live more or less everyday lives, wherever that is on the continuum of behaviors, no matter how good or bad or how many poems they write. Others are just… doomed, in some respect.
I am reminded of Harold Bloom’s assertion that literature’s only use is to help us think about ourselves in the world, the quality of being nothing more nor less than humans struggling through life with wit and grit, creating and failing and destroying with an array of emotion and words to give them personality. The job of the poet isn’t to instruct others in how to live a whole life, but rather chronicle the unending problematic situations of the life we are constantly trying to negotiate a contract of conduct with, only to find, again, that life is a pure, unceasing process, churning, burning, destroying, and creating from the ash and mire. The poet records the ironies that will not stop coming, the lessons that will always be taught to the same romantics, adventurers, would-be saints, and dime store dictators. It is one of the ironies of modern existence and the expansion of all media that the subjects of protest songs, songs that are very specific to a cause or to injustice, no longer seem to spark the desire to work toward bettering the world that the romantics among us wish would come to be. The embarrassment has more to do with our memories than with Ochs’ politics. A posthumous collection of his songwriting, the two-disc Chord of Fame from 1976, scans the timeline from how we were, thinking we could change the world with good sentiments if not concrete policies, to the way we are now, with ideals shattered and wearing a chic cynicism. For my part, I continually thank Ochs for being a significant influence in forcing me to confront and accept social justice as a living principle and work mightily to avoid the fatal view that claimed this brilliant man’s life.
(This originally appeared in the San Diego Troubadour. Used with kind permission.)
Posted by TED BURKE at 12:05 AM No comments:
Email ThisBlogThis!Share to TwitterShare to FacebookShare to Pinterest
Newer Posts Older Posts Home
Subscribe to: Posts (Atom)