MY LYRICS CAN BEAT UP YOUR LYRICS 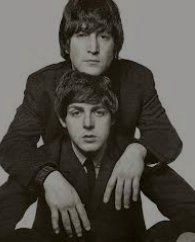 In a feature in the current issue of Slate, Jack Hamilton adds some lighter fluid to the controversy slowly boiling over who was the better wordsmith for the Beatles, Paul McCartney or John Lennon. Not coincidental with the release of the pricy two-volume, slip-cased set The Lyrics where McCartney describes his authorship of  150 songs both for the Beatles and other projects, Hamilton, as one could expect, bucks conventional wisdom and argues that Sir Paul was the superior lyricist. Do you remember any time in your younger life when you wax incessantly, continuously, and oppressively about one album, one particular album, was the greatest album ever made and that super-great album is a work of art unlike any other we've ever seen as a species and the likes of which we will ever seen again? Do you remember forgetting about that extra-fantastic disc and then listening to years , maybe decades later, and then realizing it hasn't traveled through the ages as well as you claimed? And remember what you said at the time?

I remember my hyperbolic tantrums arguing the genius of many records I have since abandoned to resale shops long ago. That is what Hamilton's defense of McCartney's lyrics for the Beatles read like, a gushy mash note. Of course, the man had a way with words, but...please calm down... Like anyone else obsessed with what the Beatles have accomplished and how it was that they created a body of work without peer, I've dived into the weeds to determine who had the more outstanding mind and pen, John or Paul. After much scrutiny, cogitating, late nights scanning lyric sheets wearing headphones while the Beatles blared loudly and made my hearing even worse than it was, my conclusion is that it's a draw between the two.

As for songwriting partners and as lone authors of single songs while in the Beatles, Lennon and McCartney seemed an evenly matched pair as lyricists, with McCartney having a substantial edge for composing engaging and deceptively simple melodies. Lennon, to be sure, could write a lovely song as well and do so throughout the band's lifetime, but  McCartney has the advantage. As Beatle lyricists,  one can strongly argue that the two were equal for fluidity and agility of expression. Their distinct personalities gave the metaphorical Beatle Universe (with some exemplary additional contributions from George Harrison) a remarkably fresh and finally unpredictable take on the human experience.  McCartney was a fine lyricist with the Beatles, and I'd even agree brilliant at times. Still, I believe the old saw that Sir Paul's best abilities as lyricist and melodist may well have remained dormant if Lennon hadn't become such a significant presence in his creative undertakings. And yes, I would agree Lennon might have remained yet another Rocker doomed for inevitable anonymity if he hadn't made McCartney's acquaintance.  This will, without doubt, be argued about till the end of time.  Notably, McCartney has been showing concern over his legacy as he approaches his final curtain, wanting the world to realize the weight of actual contribution to the Beatles' longevity, perhaps even a desire to take Lennon's reputation as the superior lyricist and intellect down a peg or two.

'Though fueled by resentment, I suspect,  there is no getting away from the fact that the solo efforts by Lennon and McCartney, including struggles with Plastic Ono Band and Wings respectively, are depressingly substandard considered against the work they'd done for the Beatles.  Of course, both bodies of post-Beatles music have pockets of the old magic, charisma, wit, and melodic bite. Still, Lennon had descended from the ranks of an artist to becoming merely a Professional Celebrity, an amazingly clueless personality whose lyric acumen was now little else but sloganeering no more subtle than a bumper sticker. McCartney, in turn, couldn't seem to write a cohesive song anymore; his song structures were erratic, jarring, disjointed, too often coming less well than office buildings abandoned during construction. His lyric writing was gibberish, and those who want to defend the words he wrote for Wings are doomed to come off as foolish wishful thinkers.

Posted by TED BURKE at 6:08 PM
Email ThisBlogThis!Share to TwitterShare to FacebookShare to Pinterest
Labels: THE BEATLES