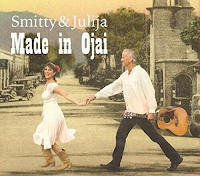 Soulful, soul searching, soul-bearing, soul matching, all terms to describe the singer-songwriters who write tunes less as candidates for hard rotation on the radio or various streaming services and more like updates on their status psyches. Much of it is endearing and attractive, depending on the artist's melodic craft and canny poetics we might be considering. Joni Mitchell? Yes. Paul Simon? Of course. Jackson Brown? Perhaps, provided what here from him is low dosage and brief. A little bit of information from the annals of someone’s psychic equilibrium goes a long way. There is a propensity among many a self-revealing artist to overshare, to dwell, to paint their remembrance in thick coats of idealized colors. Ecstasy or perpetual despair.

Made in Ojai by the duo Smitty and Julija (Smitty West and Julija Zonic), it is a tuneful disc, well-produced, lushly arranged, and highlighting the soulful vocals from the pair. The record is a mixed bag of results, with a few of the songs taking a long time to evolve into something more intriguing. “I Just Wanna Sing this Song with You” begins with doleful piano, simple arpeggio figures that dwell a shade too long, with the song easing in slowly to some crystalline vocal harmonies from West and Zonic. It is, though, a longish ballad of laying one’s heart to the glorious presence of another. The duo’s harmonies elevate the words and soar over the hesitant piano in the choruses, infusing the lyrics with heartfelt emotion. This song, though, drags when, I think, it should pick up the pace and rhythmically engage a listener in their joy, and regrettably, this is an element that hampers many of the other songs. Particularly the next song, “Let Her Go,” where the philosophical lesson of letting go of past loves, regrets, and missed opportunities to grow are lost in what becomes inevitable tedium.

Zonic has a fascinatingly vulnerable voice, suggesting a quiver, a quake, a certain fragility that suggests a trammeled soul that has gathered its wits and finds the words, the voice, the eventual wisdom to push on over the horizon. One wishes the song were more melodically proactive in the sentiment and less dirge-like. A listener exhausted by the excess of earnestness through these songs can take a rest with a nice bit of amusement, a tune called  “Trust Fund Hippy.”This is a  suitably and incisive dig into an obnoxious hipster indulging his counter-culture aesthetic with inherited money, oblivious to his own absurdity. Following suit, the music is up-tempo, with an old-time feeling, rather remindful of the Phil Ochs classic “Outside a Small Circle of Friends.” There is quite a bit to enjoy and admire in Made in Ojai, but one does wish they would have varied the fare, taken it beyond the confession box they seem comfortable in, and engaged their wittier instincts.

Originally published in the San Diego Troubadour. Used with permission.

Posted by TED BURKE at 10:16 AM
Email ThisBlogThis!Share to TwitterShare to FacebookShare to Pinterest
Labels: ALBUM REVIEW