It wasn't hip at all to like Blue Cheer when their 1968 debut Vincibus Eruptum was released. It was the usual accusations as the established critics expressed their disgust. Out of tune, they cannot play their instruments, unbelievably bad imitations of Hendrix and Cream. Some of us liked what these three guys were doing, though.I liked them precisely for the reason that others hated them for, for being atonal, loud, feedback, distorted in ways that had nothing to do with conventional ideas of texture and musical color and everything to do with making you aware of the nature of the sound, which sheer electricity wielded by some angry and impatient men eager to make a noise where there was stultifying silence previously. Blue Cheer was the perfect band for the coming age of speed freakery. The chemical essence wants to take things apart and then reassemble them rapidly, haphazardly, inspired, and excited momentarily by new combinations of components be had from that which was gutted. Like it or not, something new was occurring here, and it was something that could only happen if the players--Dickie Peterson bass and vocal, Leigh Stephens guitar, Paul Whaley drums--had more than a competent grasp of their instruments.
I was introduced to the solar skronk and abrasive swing of Sun Ra at the time through many visits to the Grande Ballroom and developed a taste for the mind fuckery of free-jazz that came from Coltrane Pharaoh Sanders, Ayler, Coleman. It helped that WABX, the FM underground station in Detroit, played some black Avant grade music. So I found similarities between what Blue Cheer was doing and the esteemed black musicians who (may have ) influenced them. The band may well have had no idea of what they were doing conceptually, and the conceit is mine alone. Still, all the same, Blue Cheer handily deconstructed the entire power trio format, pushing into to its three or four-chord limit with long jams that were groaning, grainy, belching, aggressive nonlinear improvisations keyed to only emotion. 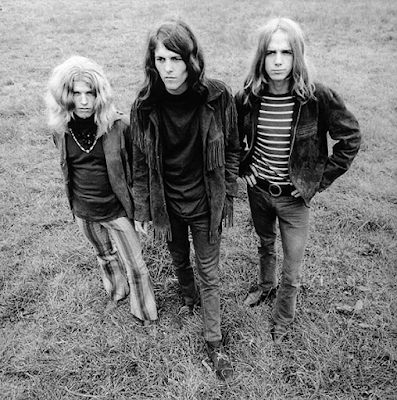 They were to the power trio what Neal Cassady was to drive. I consider Dick Peterson an able, if not great, bassist. Still, unquestionably, one of the most terrific white-blues screamers of all time--his singing was rage, self-pity, and uncontrollable impulse fused in each frayed, corrosive syllable he spat out.  His bandsaw -on-steel vocals, joined with guitarist Leigh Stephens' PULVERIZING ATONAL GUITAR SOLOS and drummer Paul Whaley's trash can demolition, Peterson and crew lay the groundwork for a generation of metal and punk bands to come: MC5, STOOGES, MOUNTAIN, LED ZEP, RAMONES, MOTORHEAD, DEAD BOYS. Even the Velvet Underground, with their feedback skronk, couldn't match Blue Cheer's steel-belted forays into electrified abandon; the Velvets merely taunted the strings of their guitar, Blue Cheer sounded like they punched holes in oil tankers. And Peterson's vocalizations were the perfect match, screech, rasp, and banshee wail all rolled into one bag of verbal outrage, maintaining a punk's slouch. His was the rusty yowl that deserved to be praised and dreaded for the unflinching combination of fear and rage it represented.
Leigh Stephens' broadsides were genuinely beautiful cascades of dissonance, pulverizing atonal breaks, the emphasis on pulverizing. I saw these guys at the Grande as well. It seems to me that I think about it decades later that this was not a man of sub-competence flailing and noodling about the frets, but someone who knew what he wanted to sound like and could get the result he desired, and that he was someone who could duplicate that sound on command.
Paul Whaley, in turn, had the most expansive, most enormous, most sledgehammer-like drumming style of the period. His sound was of every building and bridge that ever collapsed under its own weight. This is to say that I think the first two Blue Cheer albums need to be reconsidered.
Posted by TED BURKE at 9:59 PM
Email ThisBlogThis!Share to TwitterShare to FacebookShare to Pinterest
Labels: BLUE CHEER