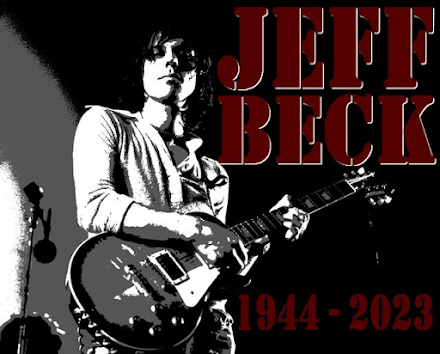 News of guitarist Jeff Beck’s death comes hard. It certainly breaks my heart, as I imagine it does for anyone who followed Beck in his many incarnations since the 1960’s. At 78 years of age, he succumbed to bacterial meningitis. Even the gods give in to the wear of aging; I had the very cool pleasure of seeing him three times in my 70 years plus of existence, including his last San Diego concert a few years back. Since the glittery vibe of the 60s and all cultural eruptions until now, Beck’s guitar work, a shotgun marriage of approaches from Chicago blues, rockabilly, proto-hard rock and jazz-fusion, was permanently embedded in my life’s soundtrack.  As a blues/rock guitarist who first came to American attention during the British invasion of the Sixties with the Yardbirds and later with his string of ephemeral (but memorable) ensembles, Beck is a pioneer in matters of extending the vocabulary of an African American vernacular and incorporating elements of funk, jazz, reggae, and fusion and rockabilly into his particular mix. He’s recorded quite a bit of music that still makes me turn my head and stare incredulously at the speakers; when he wasn’t being cheap with his playing and willing to lavish more in guitar bravado, his guitar work is of a whole piece. Not just flashy solos, which were, in fact, the least of Beck's best art, but control of tone color, splendidly, tasty fills in the interstices of his bands alternately rocking or fun.  Jeff Beck is a great guitarist because, while his compatriots were concentrating on the number of notes they could cram into a twelve-bar or sixteen-bar phrase, he did what makes him great.

Beck filled his solo slots with the gift of space, fewer notes, high register bends, and unique tunings, while others dominated their songs and performances with fusillades that eventually became a comfortable rut. I put forth his first two albums The Jeff Beck Group and Beckola in evidence and skip ahead to his fusion release Wired and still later Beck’s Guitar Shop as prime examples. That sweet, discerning blend of flash, taste, discretionary speed, off-center attack and an uncanny mastery of electric guitar volume are marvels for future generations to listen to if they wonder what all fuss was about. These weren’t records by an artist still making his reputation. Presently, his reputation is made, his name now a brand, his work too frequently a stylized snore.  Again, I wish Beck would indulge the less savory side of his musical nature and burn a hole in the state no one can leap over. That, though, is part of the fun of treating musicians and their work. All the rapid, distorted, flashier bits are missing in large measure in the interest of a more mature purity because Beck has refined his style to the point that he is drastically essentialist in tweaking his playing.  Beck has always been the most audacious of the Yardbirds triad, and he's easily the unique: only Hendrix rivals him for advancing rock guitar by light-years, and it's lucky for us that he's stayed alive to add to his legacy. Jeff Beck has made a few terrible records, but his guitar work is always better than the others. He is one of the original British blues-rock pioneers who has learned how to blend his style musical situations with strict-rock. At his best, he is riveting like no other guitarist can be. The band from the albums Truth and Beckola rocked hard with a loose but fierce rhythm section and Beck's guitar work seared like nothing else that had come before. People left their concerts without eyelashes. Becks' guitar licks sliced the meat in the butcher shop across the street, powered the generators at the ER when the lights went out. Rod Stewart's' singing forced ugly cops to stay indoors on nice days.

The July 22nd concert at the Mattress Firm Amphitheater was a revelation, I've had the honor of seeing Beck three times previously. Fluid, fast, angular, bluesy, full of blues phrasing framed sidewise, and in reverse order, tonalities from a refined adaptation of Indian classical improvisation, splintered chromaticism, power chords, fusion dynamics, and the sweetest lyric playing one would wish for. And yes, lots of funk. All of this, of course, with a fine band, including drummer Vinnie Colaiuta (Frank Zappa, Sting, Herbie Hancock), vocalist Jimmy Hall, and bassist Rhonda Smith.  Although not a hyper virtuoso similar to Joe Pass or John McLaughlin, two guitarists he clearly admires, Beck has, all the same, spent the majority of his career in a state of perpetual flux. Sometimes his playing, in my regard, missed the mark. He was always adding to his armory, changing his style, broadening his understanding of where a solo could go, and now he seems to be a superior style that's all of a piece without seams, without stitches.

Simple, winsomely stated phrases built into quick-witted crescendos. It was a night was a rich, fluent display of all his 50 years of experiments, investigations, inquiries into all manner of music from around the world. It was fluid, intense, the work of a singular artist at the very top of his form.