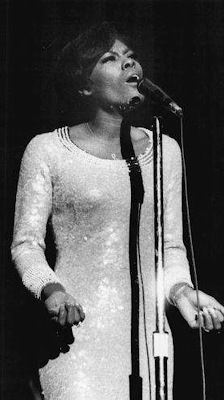 Dionne  Warwick was a vocal original . The going tradition for black pop and soul singers had been a very gospel , shout to the rafters approach that required range and training. Warwick had the training, obviously, but not the vocal range and managed in working spectacularly well within her limits. She had an interesting, off beat sense of when to sing a lyric, a subtle tone of sadness in the lower register, there was a magical sense of her speaking to you directly, softly, after a good cry. This is shown in the video of  Walk on By  , a song that begins that begins with the pacing of someone trying to hurry down a street, trying to avoid eye contact with a former lover they can't bring themselves to see, a perfect mood, at the edge of the frantic, as Warwick movingly , slowly sings the opening words of her imagined speech to her ex-paramour :

If you see me walkin' down the street

And I start to cry each time we meet

Walk on by, walk on by

Make believe that you don't see the tears

Just let me grieve in private 'cause each time I see

I break down and cry, I cry

This is one of the great heartbreak songs of the era, and it shows Warwick's particular genius for softly dramatizing a lyric by underplaying the emotion. Leslie Gore, Patty Duke and a myriad other  pop proto-divas  would have raised the roof beams with this song, but Ms. Dionne finds the right pitch. The sorrow, the self pity, the resignation is all there, but it the quality of Warwick's singing places her not in sort of hysterical moment of solipsistic self-pity but someone, actually, he is more the Hemingway stoic, shouldering the pain and the grief and dealing with what the everyday life demands. Of course, there is that sweetly sad piano figure in the chorus that presents an effective change in tempo and mood, a circling keyboard figure that halts the forward motion of the  narrative and stops the narrator, our singer Dionne, dead in her tracks, briefly and sharply  remembering the pain of breaking up.

These are rare and beautiful attributes in a singer, the capacity to emote in such a small scale; she was the exact opposite of the late Gene Pitney, who turned every sad song into an aria of teen heartache. Both singers, incidentally, were blessed to have song many songs by the Bacharach/David team, two men who knew how to write songs for a singer's vocal strengths. Bear in mind, I was a big fan of Pitney's. For comparison, above is Pitney singing "I'm Gonna Be Strong" , written by Barry Mann and Cynthia Weil (later covered by Cyndi Lauper in her early band Blue Ash). An extreme bit of heartache here, with the perfect singer for the sad tale. The tempo is the same through out, but as it progresses, subtly but quickly, Pitney's voice is stronger, filled with more self-aggrandizing emotion, a man turning in his sleep and trying to burn his way through his lose with nothing but  stoicism, but who, in the final hour, alone, will just weep as hard and as loud as he is able. The way Pitney's voice climbs to his highest register is chilling, equaling the grandiose swell of the orchestration. Tortured high notes were precisely what Pitney's music were about, observable in the operatic, compressed, grandiose and florid teen angst songs he sang with a voice that could start out low, smooth, slightly scratchy with restraint, and then in the sudden turn in tempo and a light flourish of horns or sweeping , storm-bringing violins, slide up the banister to the next landing and again defy gravity to the yet the next level as he his voice climbed in register, piercing the heart with melodrama and perfect pitch as the most banal love stories became the raging of simultaneous tempests.

It was corny, but Pitney had the voice and he had the songs to pull it off and make records that still have that stirring hard hitting effect; "Town Without Pity", "It Hurts To Be In Love", "Twenty Four Hours to Tulsa", "I'm Gonna Be Strong", and an substantial string of other hits he had ( 16 top twenty hits between 1961 through 1968) took the tear jerker to the next level. As mentioned by someone the other day in the British press commemorating his music, his tunes weren't love songs, they were suicide notes. Pitney's multi-octave sobbing qualified as Johnny Ray turning into the Hulk wherein the sadder he was made, the stronger his voice became. All this was enough for me to buy his records in the early Sixties when I was just making my way to developing my own tastes in musicians and their sounds.Most of the early stuff I liked--The Four Seasons, Peter Paul and Mary--I dismiss as charming indulgences of a young boy who hadn't yet become a snob, but Pitney? I kept a soft spot for his recordings in my heart, and defended him in recent years when those verbal battles about musical tastes found his name impugned in my presence. The Prince of Perfect Pitch deserves respect for turning the roiling moodiness of teenage love into sublime expressions of virtuoso emotionalism.

Posted by TED BURKE at 1:07 AM
Email ThisBlogThis!Share to TwitterShare to FacebookShare to Pinterest
Labels: DIONNE WARWICK