One of a Kind — Bill Bruford (Polydor): 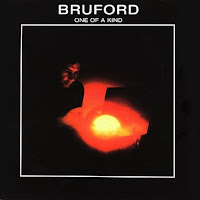 The former Yes, King Crimson and Genesis drummer deftly leads a band of superb musicians through a session that combines the best of progressive rock (a compositional organization with a rich sense of harmony and counterpoint) and the best of fusion rock (inventive soloing meshing hard-rock dynamics with fleet-fingered technique). Guitarist Allan Holdsworth performs in a fluid, fluent state of grace, and bassist Jeff Berlin works rhythmic miracles with Bruford. They provide an engrossing set of propelling polyrhythms and twisting time signatures, giving the guitarist the means to expand his boundary-pushing excursions. Especially arresting is the tone of the compositions, complex, mature, with a beautiful sense of dynamics and development, showing both the influence of the impossibilities of Zappa in the limb-twisting changes Bruford's crew negotiates and the ethereal atmospherics of a Brian Eno in the quieter stretches. The best moments remain with Holdsworth, whose extreme legato rivals any post-bop saxophonist in or out of this life, Coltrane, Shorter, Rollins, Michael Brecker, Josh Redman, you name it. His technique, smoothly deployed as he tests the out rings of a chord progression and seems to begin solos in the center of an idea and then explore the logical note sequences in both directions simultaneously, is stunning in the ways his spotlight moments build tension then releases it.
Posted by TED BURKE at 9:39 PM
Email ThisBlogThis!Share to TwitterShare to FacebookShare to Pinterest
Labels: BILL BRUFORD