Historical revisionism is a beautiful thing in matters that don't involve public policy or the fate of humanity, and the last few years has emerged a movement among able-voiced factions of the 70s music audience, fan and writer alike, who have become emboldened to say great things about Progressive Rock. I won't argue the point, although I was not the most enthusiastic listener of the stuff. As a sucker for instrumental competence leading all the way up to virtuosity, tricky time signatures, dissonance, and bold eclecticism appealed to me greatly. However, my tastes have changed course significantly toward jazz improvisation, a more expansive, less calcified field where virtuosity is put to the service of improvisation. In this area, you do something unique, your own and the likes of which cannot be exactly duplicated by any means. Prog, in the brief time it owned the FM radio band and record charts, soon became self-parody --everyone sounded like everyone else playing overly arranged music, although adherents will claim the immediately distinguish-ability of Yes from ELP from Hatfield in the North from ...--and much of the lyrics were so much mush, Tolkien by way of Dungeons and Dragons. But Starless and Bible Black by King Crimson?  Though starting at the beginning of the Prog Rock ordeal, KC never really sounded like anyone, and anyone trying to say like them did so at the risk of being ridiculed, reviled, rejected.
This record is layered, putting forth fetching, entrancing segments of gamelan percussive improvisations, a somewhat angular approach to Heavy Metal atonality, atmospherics for processed electric guitar and violin, breakneck Mahavishnu time signatures, and firestorm soloing. Robert Fripp, who I would consider the Miles Davis of Rock as he is the only constant member of this band in its fifty-plus years of existence and who made sure that the contributions of new members changed the sound and direction of KC--leads an outstanding troupe this period, especially Bill Buford on drums, David Cross on violin and John Whetton on bass and vocals. Whetton, I believe, is one of the forgotten bass heroes in the rock domain. Atmosphere, frenetic ensemble playing, exploring texturing. What more does one need? And the lyrics by Robert Palmer James are first-rate, real poetry that does not embarrass your senses or offend your more entrenched notion of how a compelling set of rhymes should be composed and presented. James merits a more extended discussion.
____________________________________________________ 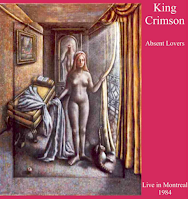 Double cd set of a 1984 concert in Montreal, during their Beat, Discipline, & Three of a Perfect Pair trilogy of releases. This grouping is one of Fripp's best lineups, with Adrian Belew, Tony Levin on bass and stick, and Bill Bruford on drums, and what we have is something sounding no less than a more muscular Talking Heads (check out "Man with an Open Heart"). One needn't choke on that if Heads aren't their idea of heaven because the abrasive textures, the angular riffing, gamelan rhythms, and swarming-bees improvisations abound aplenty here. Tasty. Crankier, spookier, more demanding, this is the goth side of Crimson, though there is little in the alternately playful/deadpan visage of the band's characters that gives you any hint of just how serious you need to take them. Clue: just seriously enough. Below is one of the great rock guitarists, for sheer whammy bar genius-- no one does six-string torture bends like him, save the sainted and departed Jimi-and I admit, I'm a sucker for his Kerouacian lyrics. Kerouac has not been my idea of anything brilliant--in fact, I think he's an absolutely horrible novelist-- but Belew is someone who picked up on what was trying to be done and made art out of it. If a failed novelist who would rhapsodize in vast portions of his best-known fictions with a careless application of jacked-up modifiers and agitated adjectives in apparent attempts to intensify the experience for the readers, Kerouac, all the same, had a talent for loose, open-form free verse poetry; although not as sharp as some of his contemporaries--Ginsberg, Gary Snyder, Michael McClure--Kerouac's verse had a snap and rhythmic sizzle that was as jazzy as he attempted to make his prose. Belew picks up on this vibe and writes in a way where the words bounce, race, and arrive on, after, and before the morphing rhythms that Bruford and Levin put across. Choppy rhythms and jerky pops and beeps; truly a band of great surprise. Fripp is the excellent Bringer of Chaos, and what's impressive is that he's been able to provide an art context for his unique music and idiosyncratic aesthetics apart from the usual lockstep spheres and institutions that crush true innovation with the same event gard template. Note: this is a 1998 release that Fripp and his DMG company have been sitting on for years. Some things are worth waiting for.  Another reminder: disc one is a cd-rom that is clunky and hard to navigate. Apparently, a video comes among its features, but I've skipped it after trying too long to access it and landed straight on the audio portion of the show, which, I hope I've made clear, is lovely and wild.
Posted by TED BURKE at 9:27 PM
Email ThisBlogThis!Share to TwitterShare to FacebookShare to Pinterest
Labels: KING CRIMSON