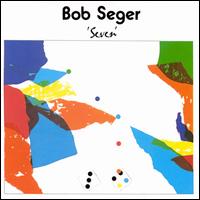 Bob Seger's SEVEN album is an uncommonly mature rock and roll statement in a scene where the rule of thumb dictates that rockers must be public idiots for audience consumption. Seger doesn't wear funny hats, tight pants showing the width of his rig, or bandy about the stage gasping and wheezing, acting like the power of the music has possessed his soul. No, Seger is content to sing his hard rock straight forward, letting the rough-edged intensity of the music supply its own excitement. And Seger is a singer of such manic power as to lay to rest forever all the inept rabble-rousing Slade, Foghat and Humble Pie indulge in. Seger has his finger on the rock and roll pulse—beat. "Get Out of Denver “opens the album, a Chuck Berry chop done the way Berry meant it—fast, intense and over with, quick. The truck driver as dope smuggler theme makes a believable image of a Semi hauling ass down a Midwest highway from a slew of county sheriff’s cars. "Need Ya" is a great lift from the Faces' "It's All Over Now." Seger's voice is breathless and hoarse, laden with an obvious base desire while some slippery slide guitar from Jim McCarty riffs under it. "School Teacher" is the weak link in the album's progression. Neither the rapid redundancy nor Seger's all stops pulled grate manage to salvage this nothing exercise. Fortunately, this fluke is one of a kind, and everything that follows is an ecstatic upward climb. "UMC (Upper Middle Class)" smacks of brilliance. Brandishing a mocking Mel Torme blues scamper while fine-tuning a witty, Mose Allison outlay of mid-century irony, Seger sings a song about wanting to be rich...Why not? One can sing the blues convincingly if one's led a wretched life to back up bragging about hard times. But who sings about wanting to be poor? Seger at once lampoons his white culture and expresses a universal aspiration anyone with an eye for better things can identify with. "Seen A Lot Floors" is great rock and roll touring song, a terse blues grunt whose matter of fact lyrical sparseness amplifies its meaning. "Seen a lot of flooooors....Seen a lot of dooooors " shouts Seger, letting the words drop into oblivion of existential detachment. The details of toad life—the motels, the groupies, the larger than humanly tolerable concert halls— all become an amorphous drug-drenched blur. A Jim McCarty solo starting with a ruthlessly stretched harmonic enters, followed by a lazily drawled sax solo, returning bluntly to Seger's bone-tired voice. Indicative maybe that after a while even the music ceases to have meaning, that it becomes part of the systemized routine that earns the artist a living. "Floors" is great. "20 Years from Now" is the only let up in the up-tempo phases of SEVEN,   a tune more mawkish than moving that is not helped by Seger's efforts to duplicate Van Morrison's serpentine quiver of a voice.  But the song is worth the listening effort if only to hear Seger squeeze his words in an affected (but effective) Otis Reddingisms. The last song, "All Your Love," again cops from the Faces. The guitar chords are chunky, metallic without approaching heavy metal, and Seger's phrasing cleanly takes from Rod Stewart without once suggesting imitation. Bob Seger is his own man, able to take from any number of mainstream rock sources and use them to his own best advantage SEVEN fires no innovating trails in the history of rock and roll, but at least it's honest, which is more than you have a right to expect from a scene dominated with disposable personas.
Posted by TED BURKE at 11:36 PM
Email ThisBlogThis!Share to TwitterShare to FacebookShare to Pinterest
Labels: ALBUMS, BOB SEGER