THE EAGLES TOOK OVER THE CITY DUMP 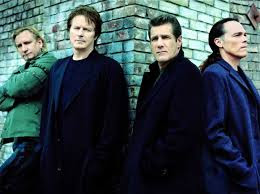 The serious Eagles fan would come to the defense of this band--seemingly as much despised as they are loved by fans--and maintain that their cynicism, despair, and weariness were anything than the routine posturings of experience-glutted rock stars, the more being that they were artful and could write good song hooks and manage to keep their songs under a certain length. Granted, although a tune like "Hotel California" , paced at a tortoise crawl and it is slow in duration, is a notable exception, notable in that it contains everything that is objectionable to this band a collective projection of the zeitgeist. The lyrics are laden in down cast metaphors where the secreted meanings are grandiosely proclaimed, exhibiting a "you know what I mean " vagueness that is an  bullet to interests in whatever forbidden knowledge these musicians gleaned from their adventures at the edge of their own limitations.  An amazingly successful rock band with some indisputably talented musicians, the Eagles are a band I never cared about. Even in their best songs they seemed, smug in the depths of despair, depression and bad-luck stories their songs evoked. Tuneful, well crafted, laden with nicely arranged guitar textures and incidental instrumentation,the sweetly harmonized lyrics were a first rate evocation of bankrupt imaginations trying their best to out -bottom the rest of rock and roll's iconic desolation row residents. In meetings of Alcoholics Anonymous there there is the tradition of a having a leader "qualify", that is, telling their tale of what it was like, what happened and what it's like now. The telling, or testimonial, if you will, would normally contain some sordid tales of their past that their  powerlessness over alcohol led them to, sometimes quickly, sometimes slowly; the point is to make the listener understand the inevitable destruction this path results unless the alcoholic or drug addict has their moment of clarity and grasps a solution, which are the components of the "what happened" and "what its like now" parts of the formula. There is the habit of some members with years of recovery (such as it might be for them personally) who eschew the solution and instead tell one horrible anecdote after another; this is not generally appreciated by other group members seeking a confirmation of the hope that is supposed to be contained in the rooms where those meetings are held. This turns testimony in a drunkalogue and the effect is of someone who takes an inordinate pride in the horrible things they have done--each instance of bad luck, lying, theft, jail time, divorce, traffic accidents, job loss,  sexual misbehavior become like bullet points on a resume. Whether they intended to or done, those who overshare such things wallow in the gloom and their words become pointless. So with the Eagles, who have spent decades writing songs as if they are the only witnesses to the end of the world, a world where only they are citizens worth listening to. Theirs was a music akin to an old car with a great, shiny new paint job; attractive surface gleam, noisy and tired under the hood. For all their gold records and fanatical fan base, they have proven to be even more tiresome than U2.
Posted by TED BURKE at 11:45 PM
Email ThisBlogThis!Share to TwitterShare to FacebookShare to Pinterest
Labels: THE EAGLES