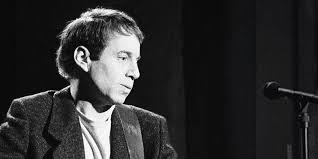 With the exception of parts of Hearts and Bones and Graceland, Paul Simon has been unexceptional. His work for the last decade has been boring in the extreme. Boring to you, perhaps, but Simon, in fact, has been quite clever and adroit in the last decade, with much of Rhythm of the Saints and Music from Capeman being among the best and varied work of his career. Not being in a rush to release new albums keeps his averages high. Granted, although saying that Simon's work in the last decade or so has music is "... among the best and varied work of his career" isn't an unreasonable statement, since in my skewed take there is more than a little that’s on a par with his best work, career wide. It's a reasonable statement. Simon easily beats the rap of being a dull artist for the last decade. "Boring in the extreme" is implausible, taken as a whole. But no matter. Comparing Lennon, or anyone, to Simon hardly amounts to a description of decrepitude. But it's not likely Lennon would have been anything remotely like Simon: it's a bad comparison when hazarding that kind of guess about what he would have sounded like if he lived. The elliptical feel to some of Simon's lyrics isn't quite the same as him being obscure, a quality in lyricist that too much of the time is ploy by lesser lyricist that disguises a lack of anything to say, or at least an interesting way of talking about what it is they think they know about the world. "Evocative" is the better word for Simon. I like a good number of the songs you've mentioned precisely because he selects his images and detail well, and creates a strong sense of the personality and tone of his situations rather than telling us how we're to respond.

Again, a listener has a fighting chance of bringing their own ideas to the narrative span in order to complete the scene and the sentiment. It's not always a success when he undertakes this, but there is little of the abstruse density you find in Dylan, or Beefheart, or Cobain, the saddest of all the sad cases. In any case, writing about marriage needn't be Hallmark cards: it's one of the central events in anyone's life, a consolidation of the complicated strands that make up love between two folks, and marriage is indeed a place to find even more inspiration as one finds out more about oneself in relation to the world. It was within Lennon's scope as a feeling artist to suss through these matters: it's a bigger shame that he never had the chance to express more of what he might have found out. You sit and wonder, after listening to the engaging, if unspectacular love songs on Double Fantasy, what interesting moods might have pushed him into his next Great Period. Dylan, Lou Reed, Joni Mitchell, Costello are songwriters who entered into new and interesting areas of writing as they came into the later periods of their life, each after some time wallowing and casting about with albums that seemed undecided, repetitive, played out. In each case, some things in their personality and personal circumstances gelled finally and gave them the legitimate voice they sought, the rebirth. Double Fantasy was a transitional album, I think, and one feels the cheat of an honestly seeking and imperfect artist finding that set of riffs and inspiration that would have enlarged his life's work.
_______________________________


My life became richer after over fifteen years of constant record and concert reviewing simply because I survived the accompanying trappings of what I thought a critic needed to have; certainly, plain old burn-out is a factor: what I loved was killing me, and the habits I had to enhance the listening experience became mere habits, after all, booze and copious drug taking. I was a drunk, rattled, a chain-smoking wreck of a pop pundit by the arrival of the early eighties, scarcely able to keep my rants on Monk, Beefheart or Phil Oches on separate tracks, I couldn't keep deadlines, and I couldn't show up at interviews my editors had scheduled. As the free albums stacked up and my trash can filled with empty vodka bottles, nothing really seemed worth having a passion for. Anyway, I sobered up eventually, taking note of friends and others I knew started to turn up dead by various means and checking into a world famous drug and alcohol treatment center in California. In any event, let us just say that my life is richer because I'm still breathing and I've had the benefit of being the rare alcoholic who has a chance to start over and reappraise what's really of value. Music, indeed, is a richer experience for me, wider and far more curious than it had been, and there is a freedom from not having to construct an instant analysis of usually unattractive people who make exotic sounds for a CD release. Another benefit is that friends don't cross the street when they see me coming since I'm not in the habit these days of laying on them spontaneous rants about Miles Davis' racial theory regarding drummers, or how Wallace Stevens' notion of a Supreme Fiction undermines Steely Dan's surface post-bop cool. It's been more fun actually talking to associates about music (or art, books, film) rather than attempt to deliver a lecture every time I opened my mouth. I'm even invited to places these days. I
Posted by TED BURKE at 11:13 PM
Email ThisBlogThis!Share to TwitterShare to FacebookShare to Pinterest
Labels: PAUL SIMON, RANT