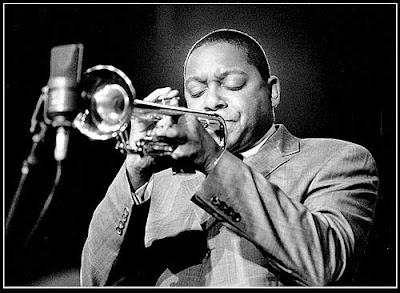 The shame of it all is that Wynton Marsalis has come to represent everything a public considers to be the 'art'of jazz, and as he continues to proffer tame music, the adventurous stuff, the "out" playing that keeps the music alive remains unheard and alien to the curious listener. That there is a Jazz Canon that needs to be loved and preserved is not disputed, it's just that Marsalis acts as if all the innovation is now past tense. Maybe he believes it is. His style is conservative and chiseled after his heroes, Miles, Clark Terry, and Clifford Brown. Their music, though, came as a result of extending their technique into areas that were unknown in the culture. Marsalis has done none of that. He is cheating himself, and boring the rest of us to death. Marsalis started the conversation, really, that it was time for African-American intellectuals and artists to define what aesthetics and historical lineage of the culture is, not European-Americans, who, though well-meaning, have dominated the discussion and have been, I'm afraid, patronizing. I say that as an Irish-American from Detroit where black music is strong and vital. Marsalis made a stab to finally place jazz in the category of High Art, and more power to him. And to you, Thad, more power to you and your points. The body of work that makes up the canon needs to be debated. Fine. Let’s make the claim for all of them. Let's just not mindlessly bash Marsalis as if he were the cause of the music's state of affairs. He brought jazz back into the cultural equation, and that's more than anyone has done in decades.


The distinction between an on-going spotlight between jazz musicians defining musical sensibilities amongst themselves, at work, and that of Marsalis discussing such things is that Marsalis has the spotlight, the media and the audience goes to him, and it is there where the debate, this debate begins. We disagree as to the role of critics, but I think the ghettoization of jazz is to be laid precisely at the feet of white writers and intellectuals. Amiri Baraka is a great man and an important critic, and presented jazz as a continuous aesthetic of liberation, and correctly defined African American music as music about freedom and struggle, and the search for new knowledge, the extension of the voice, the exploration of the soul into new knowledge. As Baraka is an unapologetic socialist to this day, a brave and lonely vantage in a culture that thinks a free-market can resolve permanent problems in the human condition, I don't think it accidental that his views are ignored, and frankly unknown to most. Marsalis William Bennett-ish view, that jazz should embody virtues conduce to conduct in a democratic society, is a valid one, and we may understand it's broader appeal, but really, neo-bop purism is needed in an art like jazz, as art, any art, cannot remain a living thing, generation-to-generation, if the past is not known. Simply, Marsalis is part of a generation of artists and intellectuals in the African American community who are no part of the mainstream dialogue in America. Stanley Crouch, Albert Murray, Cornell West, bell hooks, Gerald Earley--these are actually first-rate thinkers, agree or not with their conclusions, but the fact of the matter is that we need more high-profile cats like Marsalis, from every facet and corner of the black community to debate, to clamor, and to insist on jazz is a great American art form they created, and thus claim their rights Americans. Again, Marsalis is not my favorite player, and I think his dalliance in two camps, classical and jazz, dilutes his performances in both, but he did get us arguing something that really matters. I will say it again, for that much, he deserves our thanks.

For the ghettoization of jazz, my impression from reading Feather, Lees, Giddins, and Balliet, is the lack of lyricism in their prose, the lack of imagery in their description. The tendency--noticed over three decades of reading their stuff on and off in dailies and in journals--is that they approach jazz merely as a matter of technique and stylized virtuosity. Maybe this is the only way they could approach, maybe these were the blinders they couldn't remove, but the approach still reduced jazz to a sub-category of European music. The rise of the black artist and intellectual into this conversation is to say, all matters being undecided that jazz is not a subcategory of anyone's music. This upsets a lot of people. I think it's one of the most interesting cultural debates going on in America at the present time.

The issue for is that through jazz is a quintessentially American creation it is the creation of black-Americans, who forged the music, who have been its prime movers, and who continue, en masse, to be the innovators who define what the music will be. I agree with Isaiah. Outstanding white players, band leader’s composers and arrangers dot the historical landscape, but jazz importance as an African American art form should not be contested. Someone with the high visibility of Wynton Marsalis who takes it upon himself to speak for jazz is a resentment waiting to happen, but doubtlessly Marsalis knew this, and went ahead and ran his mouth anyway. But his project is a noble one. He recognizes that Jazz is the premier American contribution to world culture, and that it is a black art form as well, but also that the black community was forgetting about the culture that is their right to claim. Leaving specific utterances aside, specific feuds unmentioned, let's just say that his insistence on the black accomplishments in jazz, technical, social, moral, spiritual, have made a lot of white people nervous, as we white people tend to become whenever educated black men and women take back the discourse about black culture.

I've already stated that I think Marsalis is a political conservative, a William Bennett sort who has his own 'Book of Virtues' agenda in his educational projects and with his directorship of the jazz program in Lincoln Center, and that I view his own music as less than the fiery blaze of Freddie Hubbard (a better trumpeter than Wynton, really) and less compositionally textured than Ellington. But who says there has to be a consensus in the debate. To the degree that Marsalis has opened up the discussion to the larger culture, he has rendered a service to the state of jazz. To the extent that he has gotten a lot of people's dander up, well, I think that is a good thing too, because in the hands of dusty musicologist moonlighting as critics, jazz has seemed a gasping, brittle artifact, like old furniture in a museum display, that one appreciated for its former glory, for all its accumulated history. Whatever stripe you happen to be, Marsalis implies, jazz is not past tense, it is not a thing of history, it is a living thing that has a history.

Like anything else in this world of man-made concerns, jazz has many streams, rills, eddies and currents, all of which keep the pulse alive and relevant, breathing right along with us as we hear it, and in turn, become inspired to create it anew. No one that I've read here has come close to saying anything like that, and to think anyone is paranoid, I am afraid. But we're not here to re-write the history books, nor even to indulge in the fetishism revolving the arguments of well-fed men, white and black. Rather, the original topic is seen at the top of the page, the final question, really, was about our take on Wynton's promotion of the music, and the word promotion is the key. Because really, prior to his being on the scene and making a racket over jazz, bop or otherwise, the topic had been as dead as shoe leather. But now as to what jazz is or is not has become something for a wider debate, and into this debate, it draws whites and blacks into conversations with one another more so than they have been in years. And it is, by rights, one that blacks are at last debating in the larger arena. It is no longer a white man's game to define any more. This can only be good.

My criteria is whether someone can play with the desired combination of technique, feel, and wit, by which I mean the nuance, the slight twist in a note, or a phrase, that is their own personality. That is an element I hear a lot of, it seems, and younger players have their stamps to put on the music: proof for me the music lives on, that it breathes regardless of what verbs we throw at it.

The entire point of something being called classical music is that it withstands the passage of time and still has relevance to audiences a perhaps a hundred years or three into its future. Name your favorite dead white composer in this slot. The music is listened to because it transcended the fashions and resentments of its own time. It still sounds good.

Wynton displays this chops, and reveals his empathy for the music, and though I think he pales as a major jazz composer--the Pulitzer prize is suspect when its awards venture past journalism categories-- his trumpet is a sparkling, if hero-defined voice that smoothly works up a sweat on the standards, and at best cooks in smaller ensemble settings. That he's an articulate spokesman for his own cause troubles folks: it’s hard to be near someone with sweeping statements and intractable opinions who can handily back them up on the bandstand.

Wantons' efforts are ultimately worth it. Jazz is a discovery, and Marsalis is a good starting place for many--nascent listeners can venture through the record stores as we did and investigate the deep history. That is good for jazz. There is interest; the audience grows by just a few.
This whole charge that he's nothing but an adept but soulless technician is aggravatingly ancient, and unbelievable on the face of it, and it flies in the face of my own pleasure in listening to him. Granted, he does assume the voicings and attacks of his mentors--you provide the list--but he plays them in a way that makes them alive, full of grace, limber and still, voice to voice to voice, able to be relevant to any contemporary set of moods, however, sliced and diced by the anxiety of postmodernism. He is a master at this, he entertains, and he invents within the voices he uses. And the larger point is that the world is large enough for lots of different players making jazz from lots of different directions. The reality of Marsalis hardly warrants a threat to the continued livelihood of the music: it will continue to evolve and change, I'm afraid, in ways and in manners that all of us here are ill-equipped to predict. And that is a good thing.
Posted by TED BURKE at 10:27 PM
Email ThisBlogThis!Share to TwitterShare to FacebookShare to Pinterest
Labels: Wynton Marsalis