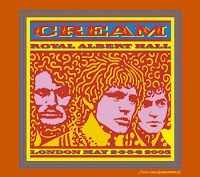 I have to admit that I have had an unnatural attraction for Cream's busy, jittery and bombastic blues improvisations for decades, as they've been a source of pleasure since I saw them first and three-time total at Detroit's Grande Ballroom in the late Sixties. Euphoric recall? Maybe, but I still play the thirteen minutes of "Spoonful" from Wheels of Fire a couple of times a year, and the sheer mania of Goodbye's "I'm So Glad" gets played just as often. The riffs, interweaving, and interjections of the three musicians holding the stage was a busy sort of vibe that was somewhere between musical worlds--too fast and loud for blues, too repetitive and unmelodious for jazz, too arty for rock and roll. It was a sound from the nascent electronic wilderness that was a new kind improvisational sound, influenced by the three aforementioned styles (with occasional garnishes from Classical or English music all traditions), but coming in the end as a new sort of strident, crackling noise; metallic, assertive, all-conquering, sometimes searing when guitarist Eric Clapton was in the mood and made each of his blues intonations speak volumes of what his own voice could not manage. It is something that has less to do with sheer mastery of their respective instruments--in a heartbeat I could name a dozen musicians who are better guitarists, bassists, and drummers than Eric Clapton, Jack Bruce and Ginger Baker--but with how the three of these guys gibed and gelled, how well their busy techniques meshed."Meshed" might not be the right word, but what it gets called, Cream's sound was a wonderful clash of distortion and blue notes, a feedback-laden trio of howling wolves. There is less of that shamanistic howl in the reunion double CD set Royal Albert Hall May 2-3-5-6 2005, which is understandable given that all three members--Ginger Baker, Jack Bruce and Eric Clapton on drums, bass and guitar respectively--are in their Sixties. It wouldn't be incorrect to say that there are enough rousing performances here of old Cream and blues standards to fill one excellent live disc. Still, this is better than any expectation I've had over the last four decades daydreaming in off hours about a make-believe reunion; the performances are solid for the most part, and I'm glad that Cream's essential duty as performers is to stand there and play their instruments. Unlike the Rolling Stones, whose rebel youth glory days have given way to a routinely graceless stage presence that would make a newcomer to their music wonder what the big deal ever was about these guys, Cream have only to instrumentalize, extemporize, improvise. Again, you wish there was only one disc, as some of the material suffers from obvious nerves, miscues, a lack of direction. There are moments when Clapton's guitar work simply quits in the middle of an idea, with the rhythm section failing to pick it up again and fill the arena with the sort of muscular blues Cream made it's reputation. The best performances, in fact, are the blues number, especially Albert King's "Born Under a Bad Sign" and "Stormy Monday", wherein Clapton vexes self-anointed blues traditionalists yet again with some guitar work that transcends income, nationality, or skin color. It's not a conspiracy against the blues that B.B.King and Buddy Guy have no hesitation saying wonderful things about his playing. The muse is something that moves around and is not at all loyal to matters of class, race or political stance, and in this case the essence of what allows blues music to convince you , at least momentarily, of the universality of a nuanced sort of suffering has taken a home in the center of Clapton's best fretwork. His own solo work in the days since Cream's demise in the late Sixties has been largely wretched pop variations on roots music--please note that Layla is the very notable exception-- but however mediocre a songwriter he has become , his touch on the blues is the touch of a master."It's all in the wrist" said Frankie Machine, the junkie in Nelson Algren's masterpiece The Man With The Golden Arm as he tries to describe the sort of body finesse it takes to win at throwing dice. It's all in the wrist with Clapton as well, and the fingers as he awards us with one ghostly tremolo and one screaming ostinato after another, the approximation of the human voice emerging from the din of electronic straining. It's spellbinding work, and it is these moments that makes the less animated performances on Royal Albert Hall...2005 worth the while.

Jack Bruce is not the stuff that harmonica heroes are made of, but his playing on "Train Time" from the Wheels of Fire album live sides was a big motivator for me to pick up the harmonica. That, along with seeing the original Butterfield Blues Band in a no age limit Detroit folk club called the Chessmate in the same period, the late Sixties. Bruce, while lacking chops as we currently define them, had tone, energy, drive, and soul. What he was doing with the harmonica was a mystery to me then, a mystery I had to solve. I am still playing harmonica 46 years later. I am still trying to solve that mystery
The Cream reunion was a significant disappointment; in the day they were hungry and ambitious and arrogant enough to think that they were the best on their respective instruments. This certainly fueled the long jams they embarked on. There were energy and an interplay that is still palpable in their live recordings from their period. Clapton was certainly a much more aggressive guitarist than he is now. The reunion was weak tea compared with the old days. Although everyone played well, generally, the performances were lifeless and make work. No one seemed into the performances.
This is a world away from jazz musicians who, as they get older, generally remained determined to play near the top of their game, that each performance of something from their repertoire was a unique and original artistic experience. This marks the difference between genuine improvisation and merely competent riffing.
Ginger Baker’s lugubrious drum solo, “Toad” by name, was the only percussion piece that I could fall asleep to; it wasn’t unlike getting used to the screaming and the crashing dishes in the apartment next door and falling asleep. That’s sad. The principle thing he did for me was to motivate me to discover the glories of other drummers, jazz drummers mainly. Jack DeJohnette, Tony Williams, Buddy Rich, Billy  Cobham,  Roy Haynes, Elvin Jones. Jones and Baker had a drum battle decades ago in New York City, with Baker and his ramped up drum set and Jones himself, the master behind the fury and pulse of John Coltrane’s finest improvisational extravaganzas, setting up a small kit. From what I read in Rolling Stone, Jones gave Baker several lessons in drumming that evening, proving that is not how many dream heads and cymbals you have, but what you do with them.
Eric Clapton has earned the right to be called a blues guitarist—no one sounds like him when it comes to this basic and beautiful musical style. He does, though, have a history of going through bands the way gluttons plow through pastries. A few years ago he did a series of concerts with fellow Blind  Faith member  Steve Winwood, with whom he performed a smart cross-section from their respective bands. It was a great combination, Winwood ’s and Clapton ’s singing a perfect blend of blues brine, and Clapton playing some the best guitar he has ever done in his career. Really, he makes much of his previous live guitar work sound workmanlike and perfunctory—on this session, he came alive.  The problem is having to wait decades for him to get inspired to play with feeling and conviction results in many other things not getting attended to.

I lost interest in Clapton's guitar work quite a while ago. Post-Cream, his solo work was pretty lazy, with outbreaks of inspiration , such as Layla or his wonderful blues disc From the Cradle. Others may feel differently,but he seems to have recycling old riffs for decades; I count from Wikipedia that he has released 16 live albums under his name over the years, a sign of  laziness, as no new material is coming forth, but also of arrogance, a conviction,if unspoken,that each of his long blues solos is a work of art, ready for prime time. This works worth Coltrane to large degree, in my view (and tastes) and much less satisfactorily for Keith Jarrett (who noodles as much as me combusts with inspiration). It's not so objectionable for a jazz musician to have numerous live albums over the course of a long career since a tenet of the jazz aesthetic is that no two improvisations on the same song are alike. Each performance is a unique work of art, and able jazz players are able to recast,re-imagine, re-brand their signature songs continually. Clapton,though, is not a jazz musician, but a blues player, with a far more limited vocabulary of ideas that simply repeat themselves. There is redundancy in his execution that becomes wearisome with all those elongated solos. These days, where he gets my attention is less the addition of new musical ideas or context, but rather by the quality of fire he brings to the old material, to the signature riffs and phrases. My favorite example is his reunion with fellow Blind Faith member Steve Winwood from 2009. Clapton's guitar work burns hot,fevered, intense, inspired throughout the two discs. This two disc set more than reclaimed Clapton's greatness from drifting, plodding and dispirited money grab that was the 2004 Cream reunion.