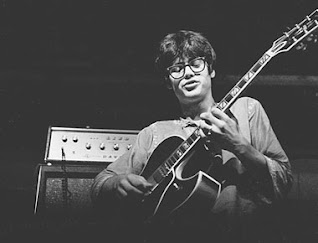 More than a few jazz encyclopedias classify the late jazz guitarist Larry Coryell's albums "Spaces" as one of the greatest fusion albums ever made, which is wrong. Some reviewers haven't listened to the album in question. What you'll hear on this album is a straight-ahead set of sessions of jazz improvisations where the two creators of jazz-rock style, Coryell and John McLaughlin, left volume and feedback behind. A beautifully realized album all around, from Coltranesque post-bebop overdrive on "Renee's Theme" to Coryell's impressionistic "Wrong is Right"; Coryell is the hard charger here, fleet, angular, filling spaces with intricate note clusters, while McLaughlin is into spaces, silences, short fines, beautiful bits of filigree. Bassist Miroslav Vitous is terrific, and drummer Cobham works miracles throughout this excellent wash of music. This album is a mad flurry of guitar brilliance.

Toku Du is among the "straight-ahead" jazz a 1988 set of sessions focusing on jazz standards combining the guitarist with Stanley Cowell (drums), Buster Williams (bass), and Beaver Harris (drums), with results being academic. These tunes, Coltrane's "Moment's Notice," Monk's "Round 'Midnight," "My Funny Valentine"-- get a neat, circumspect treatment that is gutless. The guitarist enters these "straight-ahead" projects as if he's doing penance for past sins or that he's been trying to recover his reputation as a musician since his coke-fueled days in the waning days of fusion. Coryell improves with a later release, My Shining Hour, as he rolls up the sleeves and rags and rages on material from Miles, Ellington, et al.; the playing on the later release liberated and exhilarating, and his band on that session likewise swings and rocks and pulses with a verve the present disc lacks. Coryell always bears a listen, but when he is terrible, he chews a foul root.

Not that Coryell has forgotten the jazz-rock that made his reputation in the Sixties, as we can see with Cause and Effect, which highlights the guitarist in a Tony Williams Life format with keyboardist Tom Coster and former Journey drummer Steve Smith. Coryell back in his native land, jazz-rock, and the results are prodigious, fleet, searing. Coster and Smith, keyboards and drums respectively, are a galvanized rhythm section switch-hitting time signatures and polyrhythms with a slamming accent. Coryell is very much at home, cutting, swift, brilliant. Freed from the archivist's sense of delicacy with older tunes "in the tradition," Coryell follows his wild, sober instincts and lets the notes fly; he hasn't been this exciting in a fusion context since his controversial work with Mingus. Fine and shredding. -It's been instructive to revisit jazz guitarist Larry Coryell after a decade or in other neighborhoods. A pioneer of jazz-fusion, this musician is, at his best, wildly inventive, cranky, blistering, and rapid-fire, someone akin to Jeff Beck in ways of attacking an improvisation from unexpected angles of attack. Like Beck, his body of work is erratic, and one wonders if Coryell might have become stuck on the fence in mid-career, performing an unsatisfying amalgam of mainstream bop standards, pop-jazz, and thus worthy, unmotivated funk and rock blends.

Fortunately, age and good sense have toughened the guitarist's technique; his album Tricycles and the more recent Earthquake at the Avalon are both excellent examples of this man's ability to display a fresh delicacy on ballads, fleet-fingered flurries on the accelerated compositions, and a hard-nosed edge on the blues. Of the two albums, Tricycles gets the higher marks, as Coryell has a sweet trio in bassist Mark Egan and drummer Paul Wertico bring off a varied set of styles with the ease of a unit that knows the strengths and nuances of each other's respective approaches. Coryell's guitar fairly bristles and sparkles through his rich chord voicings and new essays, with Egan and Wertico upping the rhythmic ante and lowering it again as the major and minor turns of the songs change the mood. There is a richness in the performance that suggests a larger group.