I had the amazing luck to have seen Chick Corea five times, three times with Return to Forever, a dazzling and powerful jazz-fusion band fueled in major portions by Corea's protean skills as a composer. Let be known that it wasn't just Corea alone that drove RTF to fusion greatness, as the work of guitarists Bill Connors and Al DiMeola, bassist Stanley Clarke and drummer Lenny contributed in large measures to elevating brain-scrambling virtuosity to something highly, creatively musical . But it was Corea's vehicle over all, his compositions deftly bringing in the warring genres of classical, Latin-jazz, bop, blues and progressive rock bombast into a coherent and cohesive whole. There were hard time signatures and severely rapid changes in tone and attack, but Corea had a true composer's sense of pacing, structure, of linking a variety of moods and color, into contiguous wholes that continually and (seemingly) organically morph into new shapes. There was a sense of the story teller , the saga ,the musical journey in his finest work both in RTF and in his ceaseless solo albums and projects. I was additionally blessed to see Corea as well in two other contexts, one in which he shared the stage with fellow Miles Davis keyboardist Herbie Hancock for an evening of inspired duets, and with the Chick Corea Acoustic Trio at the now-gone Elario's in LaJolla, two experiences that impressed for no other reason than that I haven't witnessed a better improvisor at the piano. His mastery of the instrument was absolute, his attack was crisp , fiery , elegant, resonating, endlessly inventive. As you might expect, his long career has seen him take many fruitful and some not-so-fruitful turns and that his body of work is simply too massive to comment on cogently here. But let us remember that Corea was firmly wedded to the jazz tradition despite his avant gard bone fides with Anthony Braxton and Woody Shaw, or his eventual crossover appeal to rock and pop audiences. Some time ago he recorded a tribute album to the late pianist and likewise protean composer Bud Powell with a select group of young jazz turks. It is a wonder tribute, and will end with a post of my review. Take off your hat, bow your head and have a good thought, we have a lost a great art ist.
Posted by TED BURKE at 6:36 PM No comments:

a rant for the MC5 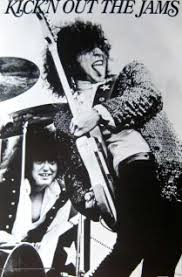 This is important shit , folks: To this day , the MC5 are not in the Rock and Roll Hall of Fame despite the impressive argument that they have been one of the most influential and , ergo, most important rock and roll bands in history. In any event, here is a choice cut not discussed much even my 5 aficionados , James Brown's "It's a Man's World". Agreed, the song is more than patronizing and winds up placing women on the damnable pedestal and back in the kitchen at the same time, but you have to hand to these guys for their odd choice. They loved black music and their choice of a song only JB could pull off is a classic punk gesture: "Fuck you guys, we're gonna play this goddamned song because WE WANT TO." Vocalist Rob Tyner did not, as has been remarked around a trash can full of burning rubber, give a FLAT FUCK if he sang worse than a horse thief gagging at the end of a dirty rope of justice. Rob Tyner sang like a man who had his head wrapped in a thick sheet of bubble wrap and then had his noggin stuffed into a burlap bag that reeked of diesel stained wagon timber and mildewed hemp. He sounded like he'd swallowed his fist in a freak accident that might have occurred when he he was chewing on his knuckles in macho-mechanical panic while watching an asteroid streak a fiery, smoky path to Cobo Hall. When he wrapped his crackling squawk to  It's A Man's World, satellites stopped broadcasting and Gabriel drove over his trumpet in a huff of overriding despair. His was the voice of percolating whiteness, personified grieving love handles with a microphone. There was a time when an attitude like that would inspire otherwise stoned and clueless teens , all of them too late for the absurd counter-culture vanities of Haight Ashbery and Greenwich Village, to yell "fuck yeah" and babble their rendition of dumb cliches about offing the pigs and serving the people. So yeah, the MC5 were really punks, macho black bad boy wannabes and crazy mofos in their right who were willing to stick it in your eye." Hah. Hit me again." The rest of the guys crammed their guitars into the cones of their amps and ground their strings against the microphone stands.The drummer, Dennis Thompson, rattled on over the snare, performed an encyclopedia's worth of imagined sexual amnesia drills over the head of the snare drum and punched a hole in the base drum with nothing other than a random disease he picked up for kicks at the last Room Temperature Ale House he was located  within. Some one in the middle of what was left of the audience that wasn't yet unconscious, bleeding or deceased hooted. "SUCK MY DICK" countered Tyner, "GAG ON MY GOODNESS, JARHEAD." After that, it started to get weird.
Posted by TED BURKE at 11:30 PM No comments: