The word "pretentious" comes to mind, as well as "waste", in so much as Corea, one of the surest and most ingenious musician/composer talents alive, takes one of his most perfect compositions, "Spain" and elongates into a series of "movements", no doubt meant to explore new ideas, poetry, impressions. What he has here is near unrecognizable from the original, except when the orchestra kicks in with some ob
ligatory figures: the improvisations from Corea and the worthy members of Origin are tentative at best--they sound like they are sitting next to insane wrestlers on a crowded bus-- and the piece, long, shall we say, stops and goes with no real dynamic emphasis or emotional wallop delivered, or even hinted at in the foreshadowing. Corea ought to know better; he can certainly do better. 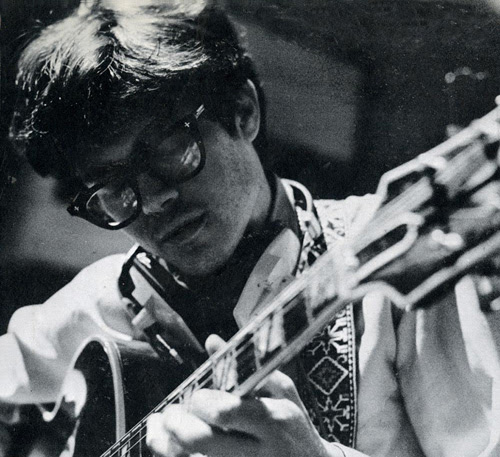 (This was an interview I did with the late guitarist in 1974, in a Sunset Strip hotel room in Los Angeles where Coryell and his new band, The Eleventh House, were performing at the legendary Troubadour to support their debut album Introducing the Eleventh House. It's been often said since his passing that Coryell was a very nice guy, a class act, a friendly and amiable sort. Sorry, scandal seekers, no dirt here, as I can attest that the guitarist was absolutely all those things. This piece originally appeared in the San Diego Door).
“John McLaughlin and I shouldn’t be mentioned in the same sentence,” said jazz guitarist Larry Coryell reacting to the endless comparisons between him and his British counterpart. Well meaning comparisons between Mahavishnu Orchestra and Coryell’s new band. The Eleventh House have been so relentless that a novice listener might
Assume that the veteran musician is arrive late to the jazz-rock arena. Coryell shrugs and sits back in the  chair in his Sunset Strip hotel room where he’s been resting before that night’s engagement at The Troubadour in Westwood. He has an unplugged electric guitar in his hands, his fingers running through a series of nimble exercises along the frets as he speaks. The guitarist is emphatic on the distinct nature of the music of the Eleventh House.

“Similarities exist, sure,” he continues, casually scanning the swimming pool of a Sunset Strip hotel while he stifled a yawn, “but beyond that, the styles vary vastly. I’m basically a white rocker caught up in black music. Tm funky, and I like to keep a funky edge to my playing. McLaughlin hasn’t an ounce of funk in his body. I admire him an awful lot and we’re good friends, don’t get me wrong. It’s just that I think the Eleventh House is going places Mahavishnu Orchestra overlooked.”

Larry Coryell is a member of that small vanguard of jazz musicians to seriously pursued the elusive jazz rock fusion, the notable others being Miles Davis, Tony Williams, Gary Burton , with whom he played, and a number of others who broke ranks with tradition. From his days with the Gary Burton Quartet in the mid-sixties to his own series of erratic but always boldly experimental albums, Coryell has sought to fuse the hard rock immediacy to the fleet fingered ecstasy of jazz. Riffs,phrases and whole lines of blended improvisational strategies that are his creation are only now being assimilated into the lead guitarist vocabulary.Against the jazzy feel of Lawrence’s soaring trumpet soliloquies and Mandel’s elegant piano textures is the abrasive hard rock of Coryell’s guitar. He likes to start playing up the blues end of it all, then whipping out unexpectedly, some deliciously fast jazz lines. Getting faster and more complicated as the solo continues, you’re sure his fingers will burn holes in the guitar neck. His body rocks steadily on the stage, making faces with each long and mournful sustained note. Not exactly an Alice Cooper feat of showmanship, but it’s nice to see someone having a good time without breaking his neck to prove it.

“I’m the luckiest cat in the world,” said Coryell, “This band is literally bursting with ideas. Our first album was ' only a sampler of what were capable of. Alphonse, he’s got material, Mandel has material, and I’ve got some. Maybe the next album will be a double record set. Then we could really stretch out things and give everyone room.” The album. “Introducing the Eleventh House” on Vanguard has “With Larry Coryell” emblazoned under the group’s name, a necessary move on the record company’s part to help sell records. “I’m nore of a leader in name,” clarified Coryell, “I’m a central point where all this unbelievable energy is organized. Frankly, these cats are too good for me to have to ^ull any authoritarian trip. If someone ‘messes up, a cold look from me is all the reprimand needed. We communicate that well. We know exactly what’s on each other’s minds.” “I wish Vanguard would go out of their way and be a big record company for us,” he laments, revealing a disdain of corporate meddling.

Larry-Coryell is the first jazz musician to seriously pursue the elusive jazz/rock fusion
“I listen to young guys like Tommy Bolin who played on Billy Cobham’s’ album, or Bill Connors from Chick Chorea’s Return to Forever,” he reflects, “playing licks 1 created back in the mid-sixties, but adding their own ideas. Man, they turn my head around. I end up taking some of their things and sneaking it into my own playing.” He eases back in his chair, rubbing his hand through his lightly greyed black hair and adds, “Man, in a few years, these guys will burn while I’m playing cocktail jazz.” But in the meantime, Coryell thinks he’s the best at what he does, and thinks the Eleventh House is the band to bring the best out of him. Live, the band is a testimonial to high energy music. As the band assumed the minuscule Troubadour (where they’d been playing a week long, three show a night gig). Eleventh House’s technicians didn’t appear much different than the varied roadies who rushed around trying to shift equipment for each set. But once past the hassles, the band exploded in an intense kinetic fury. Playing against Coryell’s galvanic guitar was Mike Lawrence on electric trumpet and Mike Mandel on electric piano and synthesizer. Bolstered and driven on by the multi handed percussion of Alphonse Mouzon and Danny Trifan’s agile bass underpinnings, Coryell, Lawrence and Mandel would play a series of quick and complex melodies, and then spin off into individual superfast but concise solos. Then, Coryell and Lawrence would trade fours at breakneck pace while Mandel laced through it all, creating delicate patterns until the other two muted themselves and let him make a definite other worldly statement with his synthesizer. becoming known to the general record buying public. “Selling fifty thousand copies of a jazz album is respectable, but we want to sell hundreds of thousands of copies. Man, we want this band-to be known to the world, but for the music, and nothing else. It’s to our disadvantage, I suppose, that we don’t wear funny clothes, jump around on stage, or destroy our instruments. We’re naked on stage, there’s nothing else except the music, and there shouldn’t be. On a good night, we can’t be touched.”

Scratching his chin, Coryell pushed the owl framed glasses up the rim of his nose and regretfully added, “The band sounds tired. We’ve been on tour. 1 wish we could recapture the energy we had last week at the University of Paris. There, the Eleventh House’s rapid fire energy was so intense that the rhythm section broke into a musical fight. It was like going beyond racial, cultural and religious barriers and them saying to each other ‘All right motherfucker, get down,’ then driving the music to the wall and then right through it. Alphonse energized everyone, Danny pushed harder, Mike Lawrence and Mike Mandel and I were trading fours and switching eights so insanely fast that no one in the band could believe it.” He closed his eyes and picked off a fast lick on the guitar he’d been toying with. “I think Tm the luckiest cat in the world to have this group,” he restated as he stood up and took a long swig from his beer, “The communication is= fantastic. Basically, let me say, there are only two kinds of music in the world: good and bad. Eleventh House does the best music in the world.”

After many years of  young fans and assorted bright acolytes telling me that I must have a listen to Radiohead's "Okay Computer" to experience one of the most important rock (or post-rock) albums ever committed to the ways of digital distribution, I finally did so, a close listen (or at least an earnest one), and found their enterprise. Far less the game changer claimed by defenders, it never distinguished itself from the other skeins of slow-coursing sludge that one finds at the extra musical margins. It's Super Mope, the mostly unassembled tunes framed by accidental associations of chord, tempo, tuning. I've absolutely no doubt that Radiohead worked diligently, night and day, for hours and hours until there were no more hours, to make sure "Ok Computer" was as close to their ideal before they released it into the wild. That, sadly, does not make this an enjoyable or anything less than irritating. Few things in music listening are trying to some make sense of some feeble ideas that sound labored over. And yes, there are lyrics, and awful ones, to match the dopey dissonance Radiohead favors. Writing from the center of a depression one cannot shake is an honored tradition, at least in 20th Century American and British poetry, with the works of John Berryman, Plath, Lowell and too many others to mention attest. And certainly, manic lows are the source of a good many lyric writers who sought to write their way out of a bad head space. Their collective goal was, if one can use such a presumptuous term, was to leave something after them that would remain as art, instances of inspired writing, even if they failed to alleviate a malaise. Radiohead's rhymes, half rhymes and no    rhymes seem more symptoms than wit, more fidgeting with a notebook and pen than a focused attempt to get at a fleeting set of moods or insights that won't quite lend themselves to common speech. It's a generational thing, I'm sure, and I reveal my age without having to tell you, but it actually is a matter of having seen this before, heard this before, having had this discussion before. The last five decade are crowded with thousands of nameless creatures at the margins of popular culture, convinced of their genius but unsure what that self-diagnosed brilliance consists of. The difference is that Radiohead caught a break. Well, good for them on that score.