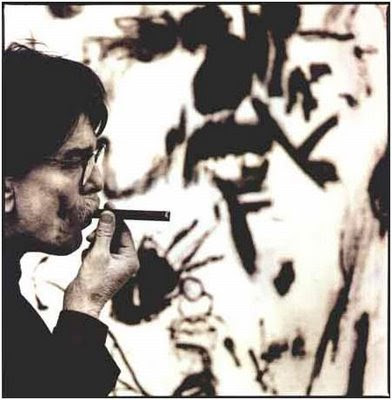 The good Captain was someone I struggled with for decades, as  his music kept me guessing as to whether he was putting me on with the trash compactor surrealism of the lyrics, the swooping, howling, icon-smashing bark that constituted his singing, or the time signatures, which seemed a rhythmic approximation of what traffic might like in a universe that had a trillion miles of road , an equal number of cars but no traffic lights or stop signs. or if he was indeed the genius his supporters claimed he was, a self-starting savant who employed every tic, gesture, sound, click, rattle and hum that caught his attention and assembled them in ways that amounted to a careening challenge to a listener expecting something more down home. He resembled no one so much as Ornette Coleman, the jazz player, and composer who kept people guessing through his long decades as a music maker, and in the case of both artists, I am leaning toward the side that considers them major musical forces of the 20Th century. What likely confounded the music fans of the time, perhaps, was the lack of obvious virtuosity in the playing--no extended guitar solos, no unpunctuated drum essays--and the lack of straightforward beginning, middle, end structure on which a band's gratuitous catalog of chops can be displayed. His music was about sound, about the layering of tones and textures, sweet blues juxtaposed against inverted jitterbug temps and "free jazz" dissonances ala Albert Ayler and the lithe,  sliding alienation of a single blues note resonating from a cheap amplifier under one of the Captain's (nee Don Van Vliet) aqua-urban nightscapes.All this in service to a man who was truly one of the very few poets to lead a rock band; while the notable likes of contemporaries Joni Mitchell,  Paul Simon, Tim Buckley or even the Beatles never quite transcended the sense that there was some serious contemplation to the words they would employ to render their "poetic" effects, The Captain was a natural word drunk, a cross between Tristan Tzara, Kurt Schwitters and Howlin' Wolf; a prankster, a conjurer of mood, an organically generated underminer of literal meaning.

Three Months in the Mirror

the lights are soft, streets soft, skies soft,
the mirrors soft
the smell of burnt powder
the moth flies through the mirror
powder falls lightly around around around
and around the sun .

One reads this, finds themselves arguing with the words and the fractured adjectives, the quirky signifiers and surrenders to it, finally, ceasing to ask   "what is talking about" and asking, instead "what is he saying?". The Captain would answer only in ways that were just as inspirationally conflated as the poem/lyric he'd just written. As a guess, I would say a momentarily less zany Captain might offer the advice that a lister should take off the headphones, go outside and trust the authority of their senses if they wanted an answer that helped. The beauty of the Captain's music was that he made you figure it out for yourself--these are your senses, build something!   Beefheart, rock's most idiosyncratic avant-garde individualist, and was remarkably at his peak with his next to last album with the Magic Band,  1978's Shiny Beast (Bat Chain Puller. He seems to have hammered his worrisome kinks and inspirational quirks into a form that benefits his talent for constructing fractured, asymmetrical, dada-derived music. Splendid use of free jazz tonalities, urban blues, Caribbean rhythms, and rhythm and blues. The music is as crankishly idiosyncratic as it's ever been (jump-cut time signatures, a free mixing of "free-jazz" randomness and pop song structures, blues and neoclassical shades blending into thick atonal texture) and Beefheart's vocals, one of the raspiest voices anywhere, deliver his Dada gesturing, free-associative lyrics with the same kind of off-kilter verve.(One would be remiss in thinking that Beefheart's lyrics are without substance or lack meaning: no less than Wallace Stevens, who explored his dreams of a world of perfect arrangements and their contradictions, Beefheart, nee Don Van Vliet chooses to inspect a terrain of imperfect things, material and organic, and forge connections and conversation between them with nothing but the force of applied and intense whimsy. ) The effect sounds like an Unlikely super session between Howlin' Wolf and Alfred Jarry (costumes designed by Max Ernst). His new Magic Band, featuring ex-Zappa sidemen as Bruce Fowler (trombone) and Art Tripp (drums) , handle the demands of the music with disciplined ease, executing Beefheart 's quixotic time signatures and self-deconstructing arrangements with a professionalism that tends toward both perfection and liveliness, usually an unlikely symbiosis in art-rock groups. However cerebral Beefheart's music sounds, though, it should be pointed out that Shiny Beast is a fun album, full of good humor and strong material. This time out, The Captain is out to entertain and beguile, a work of art that does what any object of scrutiny must do, which is to offer a genius's bluster, blarney and brilliance the only way it can be presented, in your face, without apologies or a phone number for a second date
--------------------------------------------------------------------------------------------------
Barry Alfonso comments:

Like you, I feel a great vacuum-space with the departure of The Captain from this planet. What a rare and exalted being. I had the pleasure of interviewing him back in 1982, when he was hanging out by the La Brea Tar Pits (near his good friends, Smilodon and the Ground Sloth) doing press for his last album, Ice Cream for Crow. There was a lot of wonderful blarney slung by CB that day – I especially treasure his description of the music-consuming public as “fish in a fishbowl eating their own excretum.” But he also said some things that confirm your instincts about what he was up to creatively. Beefheart definitely saw himself as a COMPOSER, akin to Igor Stravinski.

In his mind, everything in a song was a part, a movement, not the expression of an individual player – in fact, his guitarist Gary Lucas later told me that after Gary played a part in the studio, Beefheart said to him, “Thanks for the use of your fingers, man.” His musicians were his paintbrushes, his tools. This doesn’t sound very nice or respectful and Beefheart admitted as much. (His musicians – especially those who played during his Trout Mask period – insisted they had more to do with shaping the intricate song-parts than Beefheart gave them credit for. This is probably true. Yet I suspect CB so penetrated their psyches that they didn’t always realize when they were doing his will.) During our interview, Beefheart said that he got his songs whole, in a flash, and that the length of the song was how long it took to describe that single burst. That may account for the odd sense of movement and form in his songs.

It also relates to his intense visual sense – CB was a painter and he thought like one when he was creating songs. Everything from “Ella Guru” to “Ice Cream for Crow” can be approached as still-life paintings seen from various angles through the course of the song. You are given a weird scene or portrait and you walk around it, poke at it, sniff it, taste it. As you said, there’s a heavy prankster element in CB. He liked to mess with people’s minds – he gave them a good fluffing, as if he was thwacking a pillow. He re-booted your cerebellum and made the world look cockeyed – or maybe right for the first time.
Posted by TED BURKE at 12:33 AM
Email ThisBlogThis!Share to TwitterShare to FacebookShare to Pinterest
Labels: CAPTAIN BEEFHEART