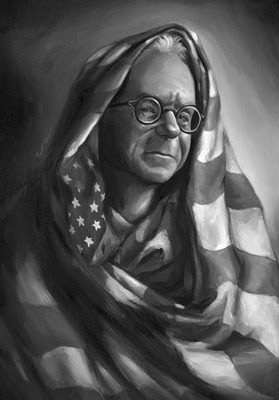 I remember seeing Greil Marcus and Anthony DeCurtis, being interviewed on MSNBC on the issue of Eminem's sick-fuck psychodramas and the failure of nerve on the part of rock and pop critics to call him on the sham, and neither was forthcoming with anything particularly intriguing about the matter. Marcus sort of murmured some mysterious, vague things from his Hegelian shroud, while DeCurtis managed to sound like a nervous, nominally liberal parent who's desperate to stay relevant in his kid's lives. Both sounded like they were skirting the issue. Not the same thing as Lester Bangs taking on the "White Noise Supremacists", attacking the incipient racism that he encountered at the edges of a nervy rock culture. Bang's response was articulate, felt, personal, absent with the detached irony that's become the most popular dodge for rock critics and other commentators to take when there's a chance that they might have to actually say something they care about.I've read Marcus since 1967, I believe, and I feel I do know him, in a way. Well enough to argue about music with, at least. The best book by Marcus, I think, is Lipstick Traces, when of the rare times where the diffuse nature of his wanderings catches up a subject that is a slippery as his point, the secret history of the 20th century. Linking The Sex Pistols with Guy Debord, Dada, and other instances of spontaneous reaction to the kind of psychic repression good old Frommians harp on is a series of masterstrokes from our author: the deferring of a resolution, the withholding of a thesis, served the book well, in theme and spirit; there is a sense of a dialectic occurring: it doesn't hurt that the writing is inspired.

Less useful are In the Fascist Bathroom, clogged, cryptic, terse bits of incomprehensibility that seems to be an attempt to be more gnomic than Christgau at his most involuted, and Dustbin of History, essays that wander around their subjects of rock, books, the arts, with a commentary that talks around the issues rather than to them. The diffuse style, effective in previous work where there was a strong sense of a cluster of ideas being brought together, here just lets the whole thing dangle like laundry tossed over a bedpost.The issue of Eminem is about the complete absence of an independent rock and pop commentary in the mainstream media that might have allowed some voices to challenge not just the content of the lyrics, but the entire rationale behind them: Marcus and such, from on high, prefer an indirect course in which to discuss the flow of history, or the reappearance of styles and trends within various cultural matrixes when asked about the sometimes Slim Shady: one rarely comes away with any sense that he thinks someone is any good. Saying yay or nay requires someone to make their case with examples, and it also requires the writer to take a principled stand, one way or the other. Principled stands give us real discussions, from which real understanding arises. The point is about the lack of real criticism of the man's work, and whether the supposed disguise works to any degree one can call artistic. The ass-kissing Eminem has gotten from big media reviewers implicitly states that the Life that's depicted is acceptable because it creates the source of dramatic inspiration. Besides handing Em his head for handing his fans flimsy, dime -store grittiness, critics ought to have the courage to say that the life is just plain wrong, bad, murderous, and to challenge the artist to imagine ways to change the world, not wallow in its ugliness. Critics used to discuss justice as something worth striving for, now it's buck-grabbing assholism that's defended under the stagey business of "detached irony". It's bullshit, and someone as smart as Marcus ought to say so.

Thousands of teens do take this at face value, and they deserve a more diverse, less-lock stepping troupe of critics to read. A critic shouldn't challenge to do better work? This lets musicians with the Million Dollar Bullhorn, whether Eminem, Sting, or Bono, to run their mouths without response. The best critics, regardless of their trade they critique, always take the call the artist to the carpet when less-than-best is offered, and certainly, it's well in their scope to yell bullshit when bullshit stinks up a room. better lyric is part of that equation, inextricable. the issue here isn't Eminem's perceived sins, but rather the over-all pass he's been given by big-media reviewers who offer overheated praise in place of real commentary. Rock criticism used to be critical, as in discussing larger contexts the music exists within. Good critics do this. Good critics would have done more digging in their appraisal of Em's offerings in the marketplace, rather than rely on worn-out auteur theories left over from the heyday of film reviewing. You might insist otherwise, but words inform the music and music drives the text, and both can be discussed, critiqued, analyzed--i.e., subjected to the sort of dissection that real criticism attempts -- with no disservice to the form.

The cynical among us would debunk the assertions of writers like Marcus (or Dave Marsh) who remain hung up on rock and roll symbolism and maintain that a loud guitar is a loud guitar, not a tool of patriarchal oppression. A loud guitar is a political tool of the left or the right. Woody Guthrie's guitar had the motto "This machine kills fascists" scribbled on it, Elvis's guitar was a symbolic revolt against a previous generation's sexuality, Townsend's power chords made dying young before growing old seem like an option one might consider: all these things are political in the broadest sense in as much as the move of rock and roll is to move people into some kind of state that's transforming: you want an audience to understand their world differently than they did before the music started playing. How well artists succeed at this, whatever their expressed intent, makes for valid, intriguing criticism Besides, what constitutes a music's "validity as music" has lot of things within that hazy phrase to discuss, and certainly bringing a light on the success of rendered political stances within the "role-playing" , and considering whether these things actually do anything that works musically is not beyond a critic's job description


Marcus is obsessed with secret histories as manifested in the inchoate habits of a populations seeking to amuse and distract themselves, and his decades-worth of rants, ruminations, and reiterations wherein he tried to wed his original concern with rock and roll as an inevitable counter-cultural force that galvanized various energies that would, finally, transform the world in very Hegelian way with the larger aims of politics and social theory, we are met with decidedly mixed results; lots of insight, extended bits of associative brilliance that only a word-drunk can manage, but a thesis, as an articulated examination of what is happening in our world typified by art, music, demonstrations, technological upheaval, the good author falls short. Lipstick Traces, of all his work, is the best example of what he does, and I would recommend it to the reader is interested in reading the poetic extrapolations of a writer who thinks that he's found something significant in the rock and pop album he bought --things as significant as the books he read in college--who cannot ,or will not, stop microscopically examining the examples he brings up and construct a theory on which his metaphors can rest.

Marcus seems to assume that the theory is implicit in the examples he pulls from the dustbin, but he makes the mistake of forgetting that he is supposed to be writing criticism, not poetry. Implicit is the idea that there are discrete but discoverable bits of spontaneous resistance in the arts to the dominant ideologies that control the money, the armies and navies, the cops, that are leading civilization to a blind-sided destruction; that it is human nature to reinvent the world informs and concept that attempt to break an enforced worldview. Marcus links Cabaret Voltaire, Dada, Rock and Roll, French Cinema and, of course, Situation-ism into this scheme, but he never makes his case convincing beyond the obvious need for him to believe it himself. It seems a beautifully rendered bit of what might have been.Marcus might have made his task simpler if he simply asked: "what is hip?"  John Leland did that, with better results. John Leland's Hip: The History is the sort of book I like to read on the bus, the portentous social study of an indefinite essence that makes the reader of the book appear, well, hip. This is the perfect book for the pop culture obsessive who wonders, indeed worries and frets over the issue as to whether white musicians can become real blues musicians or whether Caucasian jazz musicians have added anything of value to the jazz canon besides gimmick.

What we have with Hip is a what Greil Marcus has been attempting to for decades, which is write a coherent narrative of the margins of American culture, descendants of slaves and the children of immigrant parents, coalesced in ways in which each other's style and manner intermingled even if the respective races did not. The grace moment in history is that some wonderful things emerged from all this borrowing, posturing and tension, the jazz, rock and roll and a genuine American literary vernacular; the tragedy is that it took generations of racism and violence to produce the historical conditions for these vital arts to emerge. The question of hip furnishes the theme that brings Leland's sources together--what emerges is the story of two races that cannot live together and cannot be apart. Leland, a reporter for the New York Times, has done his research and brings together the expected doses of cultural anthropology, literature and, of course, music to bear on this sweeping, if unsettled account as to what "hip" is and how it appears to have developed over time. Most importantly he concentrates on the lopsided relationship between black and white, each group borrowing each other's culture and suiting them for their respective needs; in the case of black Americans, rising from a slavery as free people in a racist environment, hip was an an ironic manner, a mode of regarding their existence on the offbeat, a way to keep the put-upon psyche within a measure of equilibrium. For the younger white hipsters, in love black music and style, it was an attempt to gain knowledge, authenticity and personal legitimacy through a source that was Other than what a generation felt was their over-privileged and pampered class. Leland's range is admirable and does a remarkable job of advancing his thesis--that the framework of what we consider hip is a way in which both races eye other warily--and is sensitive to the fact that for all the attempts of white artists and their followers to cultivate their own good style from their black influences, the white hipsters are never far from blackface minstrelsy. For all the appropriation, experimentation, and varied perversions of black art that have emerged over the decades, there are only a few men and women who've attained the stature of their African American heroes, people who, themselves, were the few among the many.