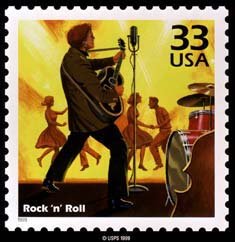 It's a bit of good fun a few years ago in a wanky article at  Slate  whose author insisted that "rockism" is the hot fire currently sweeping that otherwise dry prairie known as rock criticism, and those arguments about what constitutes "authentic" music versus that which is corporately constructed rages on among the younger writers. Such was the case when I was an active music reviewer between the 70s through the early 90s, and from the vantage point of advancing geezer-hood I have to say presenting rock and roll as the model of "authenticity", an epicenter of real music made by individuals from unincorporated communities of the soul, is ironic; rock music is turned into an institution, its essence is codified, its purpose for being and what it's supposed to instill and inspire made into canonical law. It is no longer rock versus the mainstream but rather the perplexing fact that rock and roll is the mainstream and has been for decades. Being unpredictable, free of cant and received insight, blending styles and fashioning new ways of getting folks to the dance floor is no longer possible on the scale our Utopian scribes desire. The rock revolution happened. Notice the tense. While I like a great many rock and roll bands and will insist on any debate that rock and roll remains vital and moving in much less global ways, the attempts to set a criteria for what’s honest and credible, as well as the ongoing debate about the possibility of music commentary being afflicted with a limitless set of water-fouling isms is navel gazing at best. No, really. All this intellection and meta-critical self-diagnosing is pushing rock criticism into the realm of sheer irrelevance since guys have gotten so smart that they've become remarkably obtuse in their task. In all the talk, they (we) neglect the less glamorous task of determining whether something is any good. What stinks, it seems, is the obnoxious certainty in the use of the word "dead": rock and roll is as its always been in my experience, mostly "trendy assholes" and an intriguing swath of credible acts, bands, and solo, who keep the edgy rigor of the music intact, and vital. The dustbin of history is always full, what survives the clean sweep is anyone's' guess.

In the meantime, I reserve the right to be excited, engaged but what is honest and, to whatever extent, original. If I'm tired of dead things, I should leave the graveyard. Rather, I think it's criticism that's ailing, if not already deceased as a useful activity. Rolling Stone abandoned itself to gossip magazine auteurism, Spin gave itself over to trendy photo captions and for the scads of "serious" commentary, and much of it has vanished behind the faux post- structuralist uncertainty: criticism as a guide to larger issues at hand within an artists work is not being done. Rock criticism, taking its lead, again, from the worn trails of Lit/Crit, has abandoned the idea that words and lyrics can be about anything and much of what goes on in the columns intended to weigh the qualities of music and make an educated recommendation whether a CD or download is worth the iPod memory is now a clash of jargon and deep arcana. Critics have been so busy buttressing the convolutions of their obsession that it ceases to be an item of joy and becomes only a fetishized object and rhetorical construction through which a writer's ability obfuscate the obvious can be displayed with all the bells, whistles and cell tones whizzing away like carnival rides. Somewhere the life force and vitality were sucked out; it was no longer about what you felt from a drum beat or a pounded chord on an electric guitar; rock and roll was no a catechism you had to learn.

What really killed rock music, if you insist on hanging with this tenuous thesis, weren't rock critics, but rather fans that bought the records and went to the shows. And I noticed in my time that the fans who buy the newer, grainier, more strident and dissonant stuff are younger than I am--gadzooks! The avant gard I matured with was now a younger listeners retro-indulgence. Simply, styles change, and much of what is new at first seems ugly to an audience whose tastes are entrenched and internalized. Rock criticism, like in any other manner of writing which interrogates a medium, makes the unknown explainable or at least momentarily comprehensible for the moment. Blaming writers, though, for the murder of the music gives them too much power--it's doubtful that the history of long, abstract, numb skull dissertations in the Village Voice, let alone Rolling Stone ever convinced a tenth of their readership to make the album go double platinum.

But let's forget that everyone gets old, the brain is rearranged in endless ways since the time of youthful impulse, and the world requires a more pragmatic approach to changing it. Living within the world becomes more important. It could also be as simple that our tastes changeTalent in any form will trump attitude day of the week with me, but first I have to ask what the talent is for. "Bad attitude" can be a talent by way of a trait some might think cool and alluring from afar, "chronic depression" seems to go a long way for other listeners to ignore the calculable merits of melodies, vocals, and lyrics and wallow in the sepia-toned aura of guitaring cave dwellers whose talent inhabits a dampened set of neurons. Likewise, a punk with a torn black t-shirt, crud-encrusted jeans and a spoke through an upper lip doesn't require a discourse in harmony or theory to justify the inherent value of his or her choice of belligerent tone warping. What it represents is the value, the noisy symbolism of rage, which means the niceties of song construction don't even enter the discussion. Attitude and persona only get you so far, though, and many are left scratching whatever body part that itches, wondering what the hell? So I go back to the songs themselves and weigh their characteristics--no mystery here, it's melody, vocal, lyrics again, along with musicianship, production, and a host of other niggling details--and make a judgment based on an floating scale as to how the ingredients succeed or fail in doing what songs are supposed to do, which is to kick ass, make me sad, make me rage, rant, pant, behave or go crazy in the head, or, in worst case scenario, turn off the damn noise off.

Standards and demands on good songwriting are in constant flux, of course, and you need to have the proverbial big ears to assess material's worth against not just the history of pop music in general, but also within the genre the artist writes within. Standards within standards can make this a no-win proposition for someone trying to create objective criteria, but we're all aware of the most rigorous test: DOES THE MUSIC GRAB YOU? Does it make you feel like starting a fight you know you can't win? Does it make you want to dance, pound a beer, take a deep drag of a doobie to get that momentary rush up the spine as the guitar and drums climax on some major-minor chord combat before you crash, depleted of spirit, despair washing over you like the foul fluids pouring from drainage pipe? The first reaction is one that can't be faked with faux theory and revisionist contextualization along sociological rather than musical lines. You are either moved in a visceral, immediate way, or you are left there formulating a more intellectualized response. Considered, thoughtful, critical responses are legitimate too, in their place, but there's a lot of fakery going about the net and print media. But that riff, that drum beat, that whoop of aggression that gets your legs moving, fist pumping, jaw jutting? Priceless commentary on the music coming forth, without the vocabulary to obscure cloud and confuse the experience.It's not a necessarily an accurate gauge of a song's value and worth in the scheme of recorded music, but its value lies elsewhere, in a rare moment in the week where you're responding to something that needn't, for the moment, be classified, cataloged and critiqued like it were a virus that science is trying to destroy But rock and roll, good and ill, cranks on. The spirit that moves the kid to bash that guitar chord still pulses. To say that bad, abstruse writing can kill that awards too much power to what has become an inane, trivial exercise.
Posted by TED BURKE at 10:51 AM
Email ThisBlogThis!Share to TwitterShare to FacebookShare to Pinterest
Labels: ROCK AND ROLL