JAMES BROWN SHUTS IT DOWN 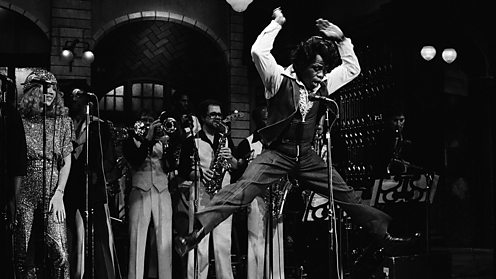 James Brown released an album decades ago who's title announced the 70's ethos in screaming, feel-good disco beats:"IT'S A BRAND NEW DAY, SO LET A MAN COME IN AND DO THE POPCORN!"Man oh man, I thought when I first came across that disc, flipping through albums at a Wherehouse Records somewhere in the San Diego beach area, this brother was about to implore us all to forget the past and to live for the moment and create a path to a rosy picture but was overwhelmed, shoe-tips to fingered pinky, but a core primal nature he refused to let himself get preachy beyond a few monosyllables. Forget everything else, forget the revolution, the high interest on easy credit loans, the lack of money when the bills are paid, the unjust wars,the lack of gasoline, the ugliness of buildings staring down on your gaping mouth as you look up toward the cloud with the wondering of when will it rain money, it was time to dance, to frolic, to make the groove paramount in how one conducted themselves. Dancing trumped every concern, and one didn't conduct themselves in any fashion, as that implies a measured, contrived and controlling manner of being in the world our spirits were forced to endure--it was a script, false, predictable, tested in the laboratories of predictability. James Brown always of using that microphone as a weapon when he was self-inducing one of his performance nervous breakdowns--right at the point when he was on his knees and his valet put the retirement cape over his shoulder--I'd seen this act a few times on television shows during the mid to late sixties--one wished he'd break the habit of the scripted break down and seize the moment with some genuine, crazed, hyena-eyed storm-bringing: GRAB THAT MICROPHONE AND SLAM THE BASE INTO THE VALET'S GUT! UTTER SOMETHING PROFOUND AND BASIC AND FREE OF VALUE TO AN AUDIENCE THAT EXPECTED TO BE ENTERTAINED IN ALL THE CONVENTIONAL DISGUISES FOR DISGUST.

"Brothus and sistahs, wonez upon atime in a cassle so fine erwwwwwwwwwwwwwwwwwHHHHHHHHHHHgggggggggggggggggggggdigittty DooooRannnnnnygumption, yeahhhhhhhh, heh, hit me, hit me gain, up onna bridge, bidge, yassuh, a manz gotta slop sum stumbling facehangdown groanfactgor yassuh! Hitme again, yeabh ,babbybabybaby, eewwwwwwwwwwwwwwwwwwwwwwwwwwwwwwwweeeeeeeeeeeeeeeeeeeeeeeeeeeeeeeeeeeeeeh, heh!"
We might assume that there are cameras at this mythical point in JB's career, this point where his harnessed intensity broke beyond the concretized limits of language and propriety and made him into a garroting example of what happens when the last brick finally falls from the last wall between chaos and organized ennui. The cameras would follow the crazed soul singer to the parking lot , where he screamed about magpies under a yellow, sodium street lamps. He would get into a car and then drive off , at once, at eighty, ninety, a hundred miles an hour, careening for a hundred miles, blasting the classical station and screaming the words of "It's a Man's World" while the static-prone station filtered a guitar quartet plucking out Bach organ solos while every abandoned furniture factory and machine shop in the Midwest sped by. State and local police, of course, were in close pursuit, and the result of all this confusion was a big dance party at the end of the highway, in the empty lot by the Piggly Wiggly and the TuVu Drive-in, where Farrah Fawcett was on the screen in the film "Sunburn". The commotion, caused by car engines, car radios, and James Brown screaming, yet again, into a bullhorn about Teddy Kennedy and the Boat, caused the movie to burn and melt as it shown on the giant screen. Car horns galore blasted as drink cups and boxes of popcorn dotted the night sky.
Posted by TED BURKE at 10:18 PM
Email ThisBlogThis!Share to TwitterShare to FacebookShare to Pinterest
Labels: JAMES BROWN