WAYNE RIKER BLOWS IT UP 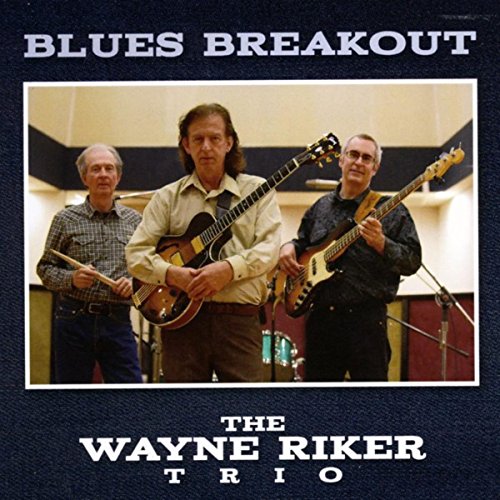 Longtime San Diego guitar stalwart Wayne Riker is an outstanding musician, a fretster with enviable finesse, fire, and fluidity who’s had his skills showcased in many ways,  in big band setups, country outfits, coffee house duos, straight blues band, and more besides. Lately, he’s been pushing the guitar upfront with the Wayne Riker Trio, a blues threesome who make the objects in the room shake with a simple formula: while bassist John Simons and drummer Walt Riker provide the steady, earnest, unflinching rhythmic backbone, lead guitarist Wayne lets it fly, unleashed.
Their new album, Blues Breakout, is literally a series of  5 extended guitar improvisations, each in a different groove, style, tempo, and steadily maintained by the solid rhythm section in unflinching precision. At the same time, Wayne fills in all the available space. There is a lot of room to fill. Still, Riker is one of those seasoned players who has listened broadly— traces of BB King, Chet Atkins, Jimi Hendrix,  Joe Pass reveal themselves in Riker’s cascading phrases—and assimilated the variety into a sweetly swift and effortless style. On “Black and Blue Boogie,” the guitarist starts his soloing out the gate, rapid-fire runs dancing along with the unyielding precision of the bass and drums, with Riker inserting punishing blues bends that snarl and growl as the mood demands and alternating his approach with each chorus he takes. A jazzy sting of notes is quickly followed by some clean, pointillist bluegrass/ country playing, followed again by some marvelous juxtaposition between a swampy, bassy sound, a low E string thump, and casually executed ostinatos, sustained notes that keep all this busy virtuosity in line with a specific vocal quality that might otherwise be lacking.  The best of the 5 tracks is “Bleeding Blue,” a six-minute slow blues that highlights Wayne Riker’s superb sense of nuance and phrase-making in a 12 bar format.
He is not one of those players who plays a phrase and will pause longish before he plays another. Like the critically underrated Johnny Winter, Riker follows one idea with another, shifting rhythmic emphasis and varying the voicing of the finite form to create tension. His lines are rapid,  precise, but never sterile.  His ideas cascade gloriously until you think his virtuosity will overwhelm everything else, but there is a canny sense of pacing here.  When you suspect he’s run of ideas, yet new, fresh variations are sounded.  Blues Breakout is more or less a one-man show, with the rhythm section being relegated to maintaining a solid grounding for Riker’s pyrotechnical exuberance. One might wish for stronger song orientation, some vocals, and less showing off. I am pleased Riker chooses to show us what he can do, uncorked, a guitarist unchained.