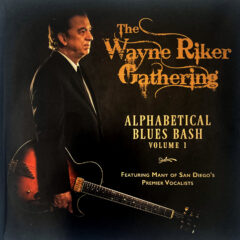 Little can  can   be added to the praise blues guitar maestro Wayne Riker has already gotten,. Much of it bears repeating, with vigor, if only for of music lovers unfamiliar with the magnificence he applies to the blues. In recent memory, Riker has released a scintillating slew of top tier blues guitar efforts, particularly on two grand slam showcases. The first, 2018’s Blues Breakout, is a hard power trio effort with a surfeit of the guitarist’s quick-witted licks. Wayne fills all the spaces and enter a rapture as his long improvisations overrun with slinky, sleek, and slicing ideas, one atop the other. The second, 2020’s Blues Lightning, a pulsing session with swift riffs, a well-greased rhythm section, and a series of guest vocals by an assemblage of the best blues singers available. Punchy, rocking, the guitarist, band, and his guest singers show a proficiency in feeling and finesse for a variety of r&b categories. His new album, Alphabetical Blues Bash Volume l, has a new edition of the Wayne Riker Gathering with bassist Oliver Shirly lll drummer Marty Dodson, and a familiar cast of grit-worthy guest vocalists. As with Blues Lightning, the new release highlights a familiar cast of grit-worth guest singers, Shelle Blue, Lauren Leigh, Billy Watson, Janet Hammer, Deanna Haala, Debra Galan, Ron Houston, Michele Lundeen, Liz Ajuzie, Rebecca Jade, and Ron Christopher Jones. The strategy of the record is an alphabetical, A through M, gathering of diverse blues classics, famous and obscure, highlighting both the quality tones of the respective vocalists and t Riker’s understanding of styles and nuance. An additional pleasure of ABB Vol l are the instrumental pieces, brief impromptus sans vocals where the guitarist’s virtuoso sense of touch is on full exhibit. A tune that grabbed me straight away was a funky version of Sonny Boy Williamson’s “Checking Up on My Baby.” Riker, and company jack-up the pace, with Wayne’s guitar work pops and punches in rhythmic precision, and his solos add a cutting series of blues licks against the rock steady backbeat. Lauren Leigh’s vocal is hot spice and fire, strong and brassy, with a bit of Aretha coming through as she soars on the high notes.

Scintillating as well is the instrumental rendition on the Robert Johnson -Elmore James work horse ‘Dust My Broom.” Hewing to the traditional arrangement, Riker’s slide guitar states the swooping introductory riff with a smooth, glistening tone and touch as he coaxes, cajoles, and caresses a gallantly melodic improvisation that simulates a singer’s expression of wonder and woe. Riker’s configurations swoop and loop over, and around the foundation. His taste in short fills, quick riffs, roiling accents in the high registers are applied with a painter’s sense of how to fill space. The classic Peggy Lee hit “Fever” (written by Eddie Cooley and John Davenport) receives a sultry interpretation by Jane Hammer, who does well with the low-key arrangement, as her whisper -like phrasing works sexily with Riker’s subdued chord work. This is the sound of seduction.; the guitar solo, spare, framed by exquisitely cresting blues bends and shadings, is the textbook example of creating musical tension and then releasing. Rocking harder is the take on Don Nix’s “Going Down,” a blues rock standard that’s had pulverizing iterations by Freddie King, and Jeff Beck, among others.

Wayne Riker takes up the tune and refuses to take a back seat. His guitar work soars, stings, and wails down the descending progression, mischievously teasing the edges of Deanna Haala’s in-your-face lead vocal. Especially bracing, in a pleasant way, is the revival of Howlin’ Wolf’s “Killing Floor,” pushed hard by Michele Lundeen’s rust-coated vocal. The band digs in hard on the changes, with bandleader Wayne unleashing a glorious and bittersweet solo, every note hitting the target dead square. I recommend paying special attention to the two other guitar displays on this fine blues outing, Bill Doggett’s “Honkey Tonk” and ‘Hank Williams’ “Move it Over.” Wayne Riker performs with the feeling and a virtuoso’s ease of play. He is simply wonderful at finding the spirit, emotion, the vibe, and verve of a song and then bringing it out with his guitar in wonderful, atypical ways.