THE DIFFERENCE WRITING ABOUT ROCK AND JAZZ 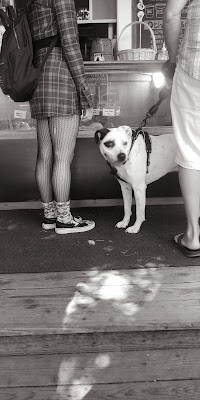 Rock is subject to and suitable for analytical methods derived from literary studies and criticisms. It was proclaimed that rock and pop lyrics were the new poetry in the Sixties, and though not many writers have made a big deal over that issue lately, the close reading, interpretation and subjective critique of lyrics is central for the majority of rock writers to this day, regardless of the genres they prefer. There are areas where musical knowledge is helpful in assessing how well a band writes songs, does its arrangements, and how well (or how poorly) their instrumental skills accomplish their intentions. All that , though, is in service to matters of attitude, world view, social impact, the expression of experience. Rock lyrics, like real poetry, try to express the unexpressable in terms of the unforgettable, to paraphrase John Ciardi.

Audiences want songs they can "relate" to on some visceral level, and applying literary habits of mind to the lyrics seems the surest way to comprehend what a lyricist is trying to tell the masses. Jazz is pretty much a different matter, as it has been around for over a century constantly evolving, morphing, with succeding generations of jazz players adding their innovations to a rich and complex history. As jazz players and composers constantly cite, musically, works and styles that came before them and adapt them for more contemporary use, writing about jazz, either as journalist or critic, requires a working knowledge of the forms, the styles, the players ...one could on and on about this.

Jazz has become America's Art Music, our own version of the European classical traditions , and though it might come across as knee-jerkingly elitist to say, I think it's the obligation of anyone who wants to write competently rendered reviews and analysis of jazz to know the music evolution and history, have familarity with styles, to know the canon, the landmark recordings, the iconic innovators. Rock and roll criticism can be as rigorous as one wants to be, but there is a large amount of room for hot-takes and other ways of winging it ; the impulse of many rock writers through the decades has been to become known as literary writers of some measure, hence a lot of prose has been written under the guise being a critique that is more about the writer's emtional life than the actual music or the artist. This approach borders on outright autobiography, and is valid only if the writer has had a life quite different than most people, and if they write sufficiently well to hold a reader's interest. Lester Bangs kind of exhausted that method (not always to good effect).Jazz writing leaves no room for those indulgences or flourishes. One can study and speak of jazz in larger cultural/political framework, but that is a matter done best if , again, the writer has knowledge, more than passing, of musical traditions and how jazz was an effective element in changing the musical and social landscape.

Posted by TED BURKE at 11:12 AM
Email ThisBlogThis!Share to TwitterShare to FacebookShare to Pinterest
Labels: NOTE, WRITING ABOUT MUSIC