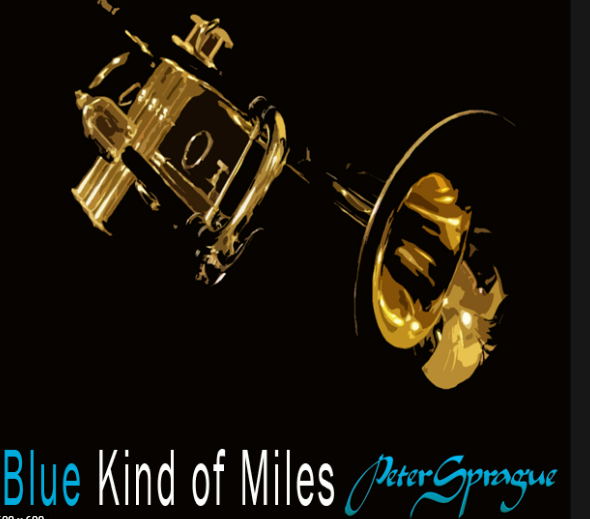 It's an odd situation when there's a jazz artist giving tribute to history's most acclaimed jazz trumpeter who proceeds with a band lacking what you'd assume is the  most essential instrumentalist. Yes, we're speaking of a Miles Davis commemoration that exists and moves forward without a trumpet player in their ranks. Odd yes, but no quandary need apply here. Guitarist Peter Sprague’s recent offering, Blue Kind of Miles, the absence of a trumpeter is strategic artistry. A reinterpretation of Davis’ music from his landmark 1959 album Kind of Blue, Sprague and longtime comrades (brother Tripp Sprague on sax, flute, and piano; Mack Leighton on bass; and Duncan Moore on drums give themselves the luxury to play with Davis’ seminal compositions. Anyone awaiting the chance to distract with useless complaints about how a younger horn player goes about playing the music of someone whose oeuvre many think invaluable can take the day off. Blue Kind of Miles, highlighting Sprague’s delicate arrangements of Davis’ mystical, modal, and near minimalist tone poems, allows the music to breathe with the fresh breath of this quartet’s sublime collective personality.

Far more than compensating in place of a trumpet is versatile reed man Tripp Sprague as the album’s secondary soloist, and throughout the disc he reveals what he knows about tone, phrasing, and constructing a soulful message. He fills his solo space with a bevy of melodic ideas on the album’s opening number, a high-stepping rendition of the Davis classic “So What.” His sound is warm and full. His relaxed yet agile playing commands close attention. Peter, as always, combines a precise lyricism to his guitar work; his ensemble work approaches a world-beating classicism, but as those who’ve followed his diverse career since he first appeared on the scene with Dance of the Universe in the seventies, there is an innate swing to his playing. Samba to bop to a bluesy funkiness, all embodied in this improviser’s statements. The haunting flamenco inflections of his spotlight section on Davis’ “Blue and Green” moves you in a way usually reserved for the saddest lyric poets.

“Freddie Freeloader” is a funky conversation among Tripp, Peter, and bassist Leighton—short, bluesy phrases and clipped riffs, something said, a pause, a quizzical response, an emphatic reassertion, another pause, and a musical shrugging of the shoulder. The band then finds the shuffling groove and makes it move steadily with sway and sass, led by Leighton’s fleet bass outing, making the bass run and skip through its walking paces and maintaining the feeling of a rag shop boulevardier seen in all his street corner majesty. Tripp and Peter provide their solos in seamless order; Tripp’s reed work is a moaning blues mosaic of deep-toned exhilaration, laying down a rhythm and blues inflected hard-bop grit he manages with  dexterity and lightness of touch. Peter’s foray into sharp notes, deft runs, and graceful octave work, following the bass line closely, hewing close to the spare theme, but lacing fleet lines at unexpected intervals. The proverbial sound of surprise. “All Blues,” likely the most covered Miles Davis composition, gets a shrewd modification in this outing, with a brisker than usual pace and some additional and tricky changes before the improvisations commence. It is to be expected, I’d say, given the universal familiarity of the original motif. Odd, but most of the versions I’ve come across over the years don’t alter Davis’ spare construction very often. This arrangement provides the atmospherics for a twisting pair of extemporization from the Sprague brothers, followed by a remarkable, rich bowed solo from Leighton. Drummer Moore, a champion on all the tracks as he performs wonderful rhythm section duties with Leighton, cannot be praised enough. Pulse, groove, flawless shifts in tempo, the man behind the traps keeps this session grooving the particularly provocative paths that Miles Davis laid out. Blue Kind of Miles is an intriguing and innovative tribute to the man’s singular vision as an improviser and composer.