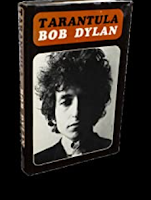 Dylan is a word slinger, maybe a genuine poet during some parts of his oeuvre. Still, he is not a writer, not as we understand the word, a craftsman, an artist, a professional of words, instructional or artistic, who crafts sentences that start someplace and create precedence for the sentence that follows, one idea organically following another until the journey of words, paragraphs, pages, concludes somewhere far from where one started to write. That is, writers write things that make sense in some respect, as in you understand clearly the thing being described, or that you understand it more abstractly and realize that the writer is undertaking a task that tries to deal with several things--philosophical notions, contradictory arguments, overlapping historical data --and bringing a coherent framework to understand complex matters, or that, or at least come away with a sense of what the writer is getting at. Even Dylan's wildest lyrics, from Desolation Row to his more recent brilliance noteworthy Rough and Rowdy Ways: surreal or non sequitur as the stanzas may be, the line limits and the need t rhyme imposed restrictions on Dylan's musings. But let's keep in mind that these aren't actual musings since musings are the sort of thought process that, though occurring while the subject is at rest, nonetheless come to a point or offer, at best, stand-alone masterpieces of coherence.  Dylan's mind is neither at rest nor looking to connect ideas in any fashion that have a resemblance to the world you both live in. As with the other great and threatening modernists, Pound, Eliot, Stern, he wants to change the way you see, feel and smell the world.

the united states is Not soundproof – you might think that nothing can reach those tens of thousands living behind the wall of dollar – but your fear Can bring in the truth … picture of dirt farmer – long johns – coonskin cap – strangling himself on his shoe – his wife, tripping over the skulls – her hair in rats – their kid is wearing a scorpion – the scorpion wears glasses – the kid, he’s drinking gin – everybody has balloons stuck into their eyes – that they will never get a suntan in mexico is obvious – send your dollar today – bend over backwards … or shut your mouths forever

the bully comes in – kicks the newsboy

you know where – & begins ripping away

The book goes on like this, one-liners of light bulb brilliance extended to the breaking point of where all associations are gone, and the brain is dead with the ravages of whatever drugs were being passed around the tour bus and found their way into the hotel room. All that can be done in the center of the night when the rest of the hotel room is either asleep or murmuring their own serenades to the dawn no one is sure will for them is to type, even more, an attempt to fill the page with a verbal world that is rhythm, cadence and shattered images crushed together in a representation of the existence that assaults the senses when exhaustion is passed by. Consciousness seems to hover by a delicate string between one last grand illumination and the final resolute darkness.

Well, yes, if you made through that tortured sentence and its unhinged and perhaps uninteresting associations, you correctly detect a hint of parody in my construction or lack of building. This is to suggest that the fault of the Dylan book is not his exuberance as word slinger or the genius he has at his most manic moments to come up with a punctuated stammer that resides very close to poetic genius--no, the fault is the mistake many a young man or woman jacked up on drugs and coffee and unfiltered cigarettes, that is the attempt to live in a permanent present tense. No past, no future, just right now, always, just us, the things in the room or in the street, things with names or no names, just us seeing, uttering names, and slapping the labels on anything that does not match. Good poetry takes time to...catch its breath, reflect, to...discover things, ideas, connections, what have you, the would-be bard hadn't the slightest idea existed in any sense. As startling as Tarantula's language seems at first, it stops surprising you even in the book's short length because the writing itself seems the very thing from which writing, as a process, was supposed to for a period free you from distractions. The writing seems a distraction. One might compare the book entirely to the proverbial over-stuff pantry that finally bursts open through the doors.

He needed to wrap up his investigations into his more obscure imaginings. He gave you something to talk about. Tarantula was written on the road, in hotel rooms, on tour, rattled off in high doses of speed, and maybe other drugs too inane to bother talking about, and it certainly reads like it, snub-nosed Burroughs, Kerouac without the jivey swing. Some parts make you laugh, some good lines abound. Still, it suffers in that readers wanted their hero, the poet of their generation, to write a genuinely good of poetry or some such thing, with true believers tying themselves in self-revealing knots to defend the book that is interesting as an artifact to the historical fact of Dylan's fame and influence and not much else. There is a part I like, effective as poetry, a bit of self-awareness that shows that Dylan realizes that his persona is false, a conspiracy between himself and the major media and that somewhere in the future, he might have to account for the construction of the whole matter.

Posted by TED BURKE at 10:36 AM
Email ThisBlogThis!Share to TwitterShare to FacebookShare to Pinterest
Labels: BOB DYLAN, TARANTULA