EMOTIONAL RESCUE by The Rolling Stones (capsule review from 1981) 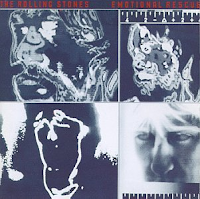 Although Some Girls was a wide improvement over the phoned-in raunch-rock the Rolling Stones came to specialized in  after Exiles on Main Street, I never thought it was really that good. There were no songs on the par with "Satisfaction," "Sway," or "Backstreet Girl" (to choose three from a sizable collection of classics). Still, I didn't think that the Stones would go as slack and indifferent to their legacy as they sound on Emotional Rescue. Might it be that they’ve become so world weary that their sense of cruel irony, which was always a refreshing bracer against the worst collective delusions and naivete of major b ands that wanted to be relevant in turbulent times, has been dulled to the degree that they’re reduced to the status of cranky uncles at the family Christmas table. They don't sound angry or outrageous, they sound as though their feet hurt.

Maybe they’re jaded, maybe they're tired, maybe they're just burned out by the stress of being the "world's greatest rock and roll band." but whatever the cause, the symptoms are apparent and irritating. Keith Richards and Ron Wood charge through Chuck Berry riffs like drunks stumbling through plate glass, Charlie Watts drumming has never sounded more uninteresting, and Bill Wymans' bass work sounds resembles nothing so much as sleepwalk proficiency. Jagger is the only one who sounds as though he's having any fun, but I suspect its fun for the wrong reason: he knows precisely what he can get away with throughout the songs he sings With a leering, mocking contempt.

The problem is that the contempt is aimed not at any of the sacred cows the audience likes to see slaughtered as a matter of routine. Rather, the smug superiority of persona and derisive disgust seems aimed toward the audience, the the front row to the cheap seats.  This is to say that the cynicism that comes easily and too convincingly for the Stones signals a flatlining of their imagination.  Living up to your reputation isn’t the same as creating something a few of us would so preciously  term art.

Posted by TED BURKE at 10:30 AM
Email ThisBlogThis!Share to TwitterShare to FacebookShare to Pinterest
Labels: ALBUMS, THE ROLLING STONES