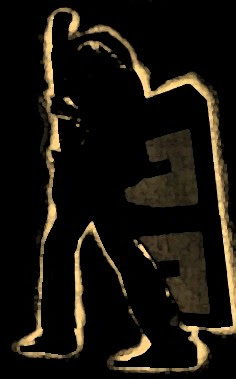 I like loud and distorted guitar the old school way, in the form of jamming power trios, those guitar-bass-drums shoot outs where the downbeats started at debated counts and the length of improvised middle section was undetermined and unpredictable. Improvisation, riffing, vamping, monochromatic chord mongering, the center portions of this species of spontaneous noise took a style cue  from several generations of black American blues geniuses and took their clear, elegantly expressed formulations of anger, pain , dread and joy and tweaked the pentatonic elements to a narrowed strain of white male rage, performed at volume levels beyond endurance levels , with the nimble, simple, eloquent rhythms and solo configurations of guitar , harmonica, banjo being replaced with a waves of distorted notes bent to their furthermost pitch of emotional credibility. It was perfect for the smoky ballrooms I went to in the late '60s, where the likes of Cream, Blue Cheer, Sir Lord Baltimore, T.Rex and Mountain belched, groaned and assaulted a beleaguered audience of addled brains with their instrumental abuse; on some nights the commotion and clamor reminded you more of a demolition derby instead of a unique engagement with a fleeting muse. The impact was more important than configuration. There was joy when, in Detroit where I lived, I came upon the MC5 and the Stooges. The 5 were every car Detroit had manufactured being tossed off the top of the Penobscot, the tallest building in town; they had a speed and power only the fury of an accumulating gravity could provide, and half the fun of watching these guys batter, abuse and flail their instruments while the wiggled and wrenched themselves in hip-thrusting deliriums was the expectation of their metaphorical car crashing, smashing into the hard, metal strewn concrete below. The Stooges were, on the other hand, the guitar that was tossed off with a violent fling at a bad rehearsal and left on, still plugged into the amp, humming and crackling the whole night; Ron Ashton's guitar work was perfect, imperfect, with a wood-chipper rhythm, a perfect three and two-chord background for Iggy Pop, who's psycho-sexual explorations into the outer areas of teenage impatience would make you think of a zombies severed arm. It still twitches across the blood, the hand is still making grasping motions for your neck, you realize that even death cannot stop this force that requires your attention.


Posted by TED BURKE at 12:55 AM
Email ThisBlogThis!Share to TwitterShare to FacebookShare to Pinterest