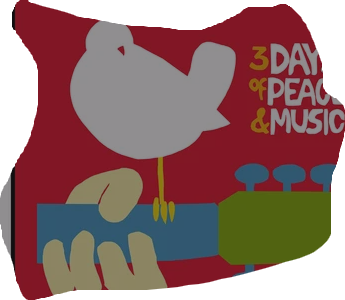 I had enough trouble maintaining an even keel when the film Woodstock was released in 1970. Even as a 17-year-old poet wannabe who loved the idea that Youth Culture, The Counter Culture, the new poetry found in the New Music would be of great transforming value for the world to yet to come, something about the famous account of the 1969 rock festival in upstate New York—something about the documentary concerning the famed rock festival had an off-putting hubris. All those hippies gathered for no good purpose, catching a ride on the swells of a collective ego, seemed a massive wallow in self-congratulations for being groovy beyond redemption. I remember mostly maintain my cool about the hype around the mythos of the event and the overpraise for the film, only to lose it finally in the matter when in 1981 NBC opted to broadcast the film on the concert’s tenth anniversary. Typical of a ratings grab, the network overkilled the entire enterprise. Rather than showing the film as it was (already noteworthy for its sense of self-congratulation), the powers that be at the network instead whittled it down into something safe and defused, entitled Woodstock Relived. In their production, NBC managed to change Woodstock from an historical footnote where pleasant memories can be derived and gave it the substance of a daydream. Woodstock Relived became, literally, naught but the magic land of Oz. and the audience, a gaggle of Dorothies stranded in a metaphysical Kansas of the soul, became suddenly transported to a land where dreams come true, and all endings are happy. NBC's purpose, I suppose, was to make the surfeit of long-hair, strange costumes, loud music, hints of nudity and free-love in the original motion picture somehow acceptable to the mainstream TV public by contriving a method that would "explain" the phenomena to an audience who might still be bewildered by the fête ten years hence.

The primary proof of this is their choice of hiring Beau Bridges to provide a running commentary. Seated on a set equipped with a TV monitor, Bridges exuded the authoritarian calm of Walter Cronkite, seeming to adjudicate over a political convention. Where the first version of Wood51ock trusted the editing and the sequence of scenes to form their narrative—perhaps they had a better sense of who their potential audience was—the NBC editors would often flash the beginning of a musical act as Bridges would fit the film into a strained metaphorical context, as evidenced by two principal scenes in which the wishful thinking interpretation of the event belies its banality. In the first. Joe Cocker's head appears on the screen as the first strains of "A Little Help from My Friends" are played while off to the side, looking mellowly certain of his line. Bridges waxes poetic ~t: 'II on the spirit of cooperation that distinguished the event, citing the music as proof positive of his thesis with the words "When Joe Cocker began to sing. He told the world what Woodstock was all about." My response and others as well, was a loud "oh come on now." not because Bridge's analogy sounded stupid but because even a cursory examination of historical fact brings the whole notion of\ what the counter-culture actually was into question .ln fact, "what Woodstock was all about" was a matter of too many people showing up for an event whose producers expected less dense crowds, an alarming strain on existing food, toilet, sleeping and medical capabilities. And the remarkably benign response of surrounding townspeople. The National Guard and the Army to alleviate the hazards of overcrowding.

And Cocker himself, being less than the spokesman for anyone, was a scheduled performer with only one US hit who had to play under the most unusual of circumstances. Wood - stock, in other words, was an accident of circumstances, and the fact that the crowd was more or less peaceful was little else but a fortuitous fluke. The NBC folks, though, wanted a structure in which to place the fair, a coherent "theme" with which to make the film an item one could stand, so they exercised their kind of historical revisionism, a revisionism intended to give the illusion that Woodstock can be understood in the most banal set of generalizations. More insidious than forcing the image of Cocker into a cheap, glittering cliché was the way they represented Country Joe McDonald. If memory serves me correctly. McDonald and his group The Fish were the mo t straightforwardly political of all the Bay Area rock and roll bands, going beyond the then trendy politics of the anti was movement and involving themselves with many new-left causes, including various benefit concerts for the Black Panthers, SDS, and other militant groups whose rhetoric frequently called for a "revolution" of a usually unspecified sort.

The sensibilities at NBC, though, were either afraid of the depth of McDonald's obvious activism or were just plain ignorant of it, and chose instead to reduce him, like Cocker, to little more than evidence for a foregone conclusion. Completely sniping out McDonald's "Fish Cheer" ("Give me an F," and so on, until everyone is deliriously yelling FUCK). McDonald is first shown half-way through his son~ "Feel Like I'm Fixin' To Die' on the set's TV monitor while Bridges, his eyes puppy-wide his voice dripping a honey toned sincerity, generalized about the turmoil of the period, mentioning the dissent over the Vietnam War as a demonstration of "thousands and thousands of young people who deeply loved America who had something to say about the quality of life in this country, not just for them, but for generations to come." Then almost as an afterthought. The rest of McDonald's tune is played uninterrupted. Other examples abound endlessly throughout the run of Woodstock Relived of the way the producers of the show sought to make the original film presentable: the excising of all nudity, the elimination of all strong language that formerly peppered the soundtrack, only a cursory depiction of the drug use and most galling, Bridges' insistence that Woodstock was nothing more than "kids letting off steam." During a sequence of shots that show kids mud-sliding after a heavy rain.

Bridges literally said something to the effect that they were engaging in "not good clean fun , but what's the difference?" The festival sounds positively wholesome, all-American, like going on a weekend retreat or sending one's son off to Boy Scout Camp. By implication, the 60s are made to sound wholesome and good clean fun, just a period of rowdy behavior no more deadly than a fraternity panty-raid. The implication, though, goes deeper, hinting that the Woodstock festival itself can be held up in the light of history as being the quintessence of what the 60s were "about." All the Prepare for variegated strands that marked the cultural and political atmosphere of the decade had merged to a head at the festival, and that each had found its fullest expression. This revisionist arrogance galls me to not end - the assumption being that Woodstock can be called representative of the 60s - but the fault in this case must fall to the TV producers and not the original filmmakers. The original Woodstock was, to its credit, a documentary of a specific event that did not attempt to generalize a world view. Even with the paucity of good music, the cretinous photography of the acts and the inane good vibe banter of the concert goers, the original Woodstock is nonetheless an accurate, if obviously biased representation of the festival, treating the event as something in and of itself, within context, without any pretense of imposing an overall "meaning." Though, the film has dated badly.

One can still see it and retain a perspective that keeps one's sense of propriety in order: something similar to people recognizing the follies of unrepentant youth. Woodstock Relived, however, denies the original film's generic integrity and transform into an effective additive to the cultural epidemic of nostalgia, a condition that has us believing in false Edens. Like an evangelical preacher citing Bible passages over the airwaves to legitimate their political stance in terms that transcend the machinations of human being, the how's producer composed for themselves a bill of good as to what the 60 meant and used the festival the Irrefutable Truth. Woodstock thus become romanticized to the point that excludes perspective for analysis. The 60s become trivialized with no attempt to take the longer more comprehensive view of the decade, and ultimately, all of our experiences of the period become cheapened, having fallen victim to a corporate reductionism whose ideology demands a narrative style that deliver us to a horde of dollar-eyed advertiser. The larger pity of this is that anything anyone was struggling for - a better world, peace, a society free of exploitation—become part of the mainstream, the birthday ribboned package of lies we tell ourselves to have the nerve to trudge ahead into a future with something like hope. Under the shoulder-to-the-wheel bravado we drape our waking lives in, our dreams tell us what we won't speak of over breakfast, at work, or even sitting alone minding our own business, that the future is not a destination legitimated with greater and finer purpose, but merely a station of merely passing through the days with what we've learned from being alive so far. The idea is that life in -the -moment exists in what we bring to it, our experience and the eventual gathering of personal knowledge sometimes called wisdom. The real terror of this life is we wonder if we've learned anything at all up to this point.

Posted by TED BURKE at 7:45 PM
Email ThisBlogThis!Share to TwitterShare to FacebookShare to Pinterest
Labels: WOODSTOCK