"A White Shade of Pale"  is among the many classic rock tunes who'se virtues and demerits have been a persistent source of ambivalence in my decades of  forming a  hard line on any number of classic rock artists. Concerning AWSOP, it might be enough to say that for all the grandeur of the Bach-like organ that defines the song, the Elizabethan vagueness of the lyrics and the soulful vocal that invested the opaque lyrics with more drama than was warranted, I've grown sick of the tune and hope never to hear it again. The exhaustion has more to do with exasperation since the band that did the song Procol Harum, had quite a catalog of albums containing better, more adventurous songs. Now one of its key members has passed, and a moment to appreciate what he and Procol Harum accomplished is in order. 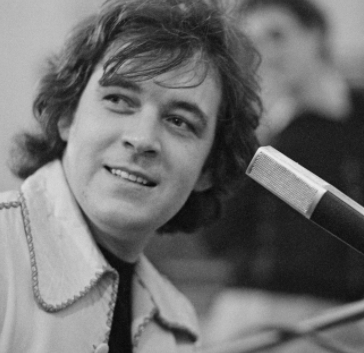 Gary Booker was a fine and expressive singer /keyboardist for a grand British band, Procol Harum. The band was never really a blues band, but the blues were never that far from their original songs, all of which featured lyrics by Keith Reid. Reid was considered a full member of the band since his agile handling effectively sketchy terrains involving of mystery, alienation, resignation, gallows humor and world weariness. His skill at creating odd atmospheres with is stanzas had as much to do with creating the public's perception of the band as their instrumental styling. Robin Trower, another founding member, brought his serpentine and stinging blues influence to the more classical and disparate folk influences that informed the band's catalog of tunes.

Booker, a restrained vocalist who magically combined nearly perfect diction with an effective suggestion of a blues wail boiling under the tonal calm, was fine , even brilliant interpreter of Reid's curt surrealism. This song for consideration here, "Juicy John Pink" from their 1969 album A Salty Dog, is a blues, a straight ahead blues sans classical garnishment, reveals the combination of vocal, lyrics, and guitar that brings us a tale of a soul on his last day on earth entreating the Lord to take him to Heaven rather than the dull agony of Hell. Gary Booker, RIP.