A LINE OF DEFENSE FOR BUDDY MILES 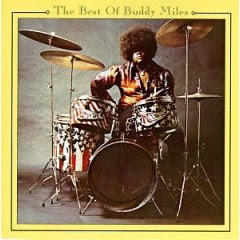 From the start I admit that the late drummer Buddy Miles wasn't the flashiest stick man that had ever climbed a big drum set, and it should be noted that his reputation as a musician suffered in the long run . His skills on the drumheads had become a punchline to a joke that didn't have to be set up. Still,I was sorry twhen I heard in 2008 that he   Miles, had pased away. Best known for his work with Mike Bloomfield's Electric Flag and for Jimi Hendrix's Band of Gypsies from the faraway 60s, has passed away due to apparent heart disease. The odd thing was that even with playing with the likes of John McLaughlin, Carlos Santana, Jeff Beck ,Wilson Pickett as well as Hendrix and Bloomfield, Miles got little respect as a musician, often being derided as a monotonous time keeper who's straight forward , rock solid drumming were a drag on the greater musicians who opted to play with him. It was a bad rap and Miles deserved better. He certainly did better on disc than his detractors claimed.

His drum work on John McLauglin's landmark Devotion album, a seminal session of pulverizing jazz-rock riffing and fret scraping, is sharp, hard and bracing in sound, uncompromising as a project that was bringing jazz-fusion , as a form, into a viable mode of hard-luck ad-libbing, an application of an eight- to- the- bar tempo with chitlin' circuit rim shots anchoring the explorations of others who were catering the shotgun wedding of jazz and rock. It's a great, sharply textured album, wonderfully refreshing and alive with the spunk soloing, quite distinct from the muzaky malarkey the music later turned into. It's been said that the initial release of the live Band of Gypsies contains some of the most inspired, impressionistic and brilliantly fluid guitar work Jimi Hendrix ever recorded, to which I would agree, and to which I'd add further that Buddy Miles steady, consistent , hard charging drum work deserves much of the credit.

The generally favored Hendrix drummer, Mitch Mitchell, had jazz chops, sure, but the truth is that what he, Hendrix and bassist Noel Redding did on stage was flail about, out of key and erratic in tempo and transitions; the task of waiting for those moments when Hendrix "took off" and gave us one of those pockets of genius amid the miscues, the bad notes and feedback often was more work than it was worth. The Band of Gypsies was a steadier thing, a firmer base for Hendrix to improvise over; as Hendrix died young, we'll never know if he'd improve his technique and advance on to playing with drummers like Tony Williams or Elvin Jones, but for the moment all the graces Hendrix had--original sound, emotion, a mastery of volume--fell into place when he had Buddy Miles as his backbone. Buddy Miles did good Thanks, friend.
Posted by TED BURKE at 10:37 AM
Email ThisBlogThis!Share to TwitterShare to FacebookShare to Pinterest
Labels: BUDDY MILES