A HERO AIN'T NOTHING BUT a BUTT RUB 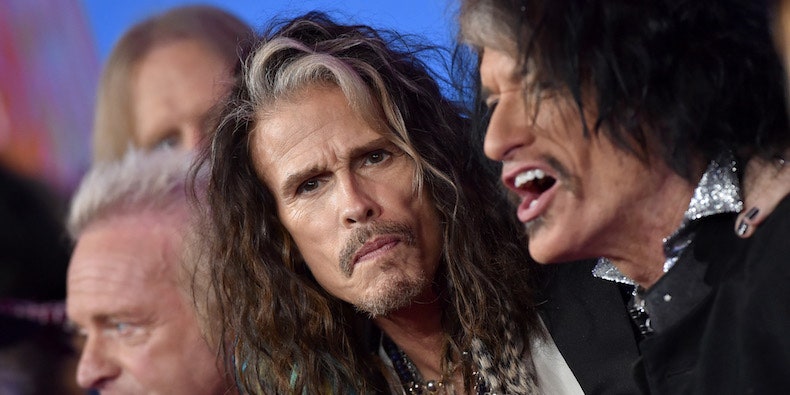 I like Aerosmith and still get an adrenaline rush when I hear their best tunes. guitar-centric rock was my preference in the Sports Arena days, but where other bands of the era now bore me and dated themselves badly, AS were pretty much the best at catchy riffs, savage, terse guitar solos, and absurdly clever double-signifying lyrics. The words “hero” and “jerk” meant pretty much the same thing, a person, usually male, who lacked social grace and /awareness and would subject the community around him to eruptive demonstrations of a personality that was the breathing variety of spray-can graffiti, bold, smeared, runny, jagged and stupid as a bag of wood chips. Luckily, yes, I survived the best I could do in those days and learned that there were more interesting ways to make art, to have a conversation and woo a potential lover, subtler forms of conversation and chatter, smarter ways of making your presence known. But we all must start somewhere; I was lucky enough to have wanted to aspire to be somewhat more than a farm-league lout.

The combination of riff -craft and professed cocksmanship was made to order for any frustrated 20-year-old genius yearning to abandon his book learning' and take up the microphone, center stage, instead.  As you know, my tastes have gravitated, gratefully, towards mainstream jazz and blues over the last thirty-five years--classic Miles, Coltrane, Mel Lewis, Wayne Shorter, Joe Pass, lots of Blue Note, Atlantic, ECM, Pacific Jazz, Verve, Impulse, Fantasy record releases--and rock and roll no longer interests me in large measure. But I still get a charge when a good AS is played--I rather like Tyler's rusty drainpipe screaming, and I believe Joe Perry is one heck of a good chunk-chording guitarist. It helps, I guess, that these guys never got far from some rhythm and blues roots, even if those roots come from the Stones and not Motown or Stax. This may be damning with faint praise, but they were a brilliant expression of a young glandular confusion. What makes this art is this band's skill at sounding like they never learned anything fifty feet past the schoolyard and not much else beyond the age of 25. As we age and suffer the sprains, creaks, and cancer symptoms, inherited and self-inflicted,  our past gets more gloriously delinquent more we talk about it. We find ourselves gravitating to those acts of yore who seemed to maintain a genuine scowl and foul attitude.  Nearly any rock band based on rebellion and extreme bouts of immaturity just seems ridiculous after a while--Peter Townsend is lucky enough to have had more ambition in his songwriting with Tommy and Who's Next to have lived down the dubious distinction of having written the lyric that exclaimed that he would rather die before he got old.  Aerosmith, in turn, still sounds good and rocking as often as not simply because they have mastered their formula. The sound a generation of us newly minted seniors occasionally pined for remains the audio clue to an idea of integrity and idealism; what is disheartening, if only for a moment, is that this band's skill at sounding 21 and collectively wasted is a matter of professionalism and not an impulse to smash The State.

Rock and roll are all about professionalism, which is to say that some of the alienated and consequently alienating species trying to make their way in the world subsisting on the seeming authenticity of their anger, ire, and anxiety has to make sure that they take care of their talent, respect their audience's expectations even as they try to make the curdled masses learn something new, and to makes sure that what they are writing about /singing about/yammering about is framed in choice riffs and frenzied backbeat. It is always about professionalism; the MC5 used to have manager John Sinclair, the story goes, turn off the power in the middle of one of their teen club gigs in Detroit to make it seem that the Man was trying to shut down their revolutionary oomph. The 5 would get the crowd into a frenzy, making noise on the dark stage until the crowd was in enough ranting lather. Sinclair would switch the power back on at that point, and the band would continue, praising the crowd for sticking it to the Pigs. This was pure show business, not actual revolutionary fervor inspired by acne scars and blue balls; I would dare say that it had its own bizarre integrity and was legitimate on terms we are too embarrassed to discuss. In a way, one needs to admire bands like the Stones or Aerosmith for remembering what excited them when they were younger and what kept their fan base loyal.

All I would say is that it's not a matter of rock and roll ceasing to be an authentic trumpet of the troubled young soul once it became a brand; rather, rock and roll has always been a brand once white producers, record company owners, and music publishers got a hold of it early on and geared a greatly tamed version of it to a wide and profitable audience of white teenagers. In any event, whether most of the music being made by Elvis, Jerry Lee Lewis, and others was a weaker version of what was done originally by Howlin Wolf, Muddy Waters et al. is beside the point. It coalesced, all the same, into a style that perfectly framed an attitude of restlessness among mostly middle-class white teenagers who were excited by the sheer exotica, daring, and the sense of the verboten the music radiated. It got named, it got classified, the conventions of its style were defined, and over time, through both record company hype and the endless stream of Consciousness that most white rock critics produced, rock and roll became a brand.

It was always a brand once it was removed from the black communities and poor Southern white districts from which it originated. I have no doubt that the artist's intention, in the intervening years, was to produce a revolution in the consciousness of their time with the music they wrote and performed. Still, the decision to be a musician is a career choice at the most rudimentary level, a means to make a living or, better yet, to get rich. It is rare to a non-existent musician who prefers to remain true to whatever vaporous sense of integrity is poor.

Even Chuck Berry, in my opinion, the most important singer-songwriter musician to work in rock and roll--Berry, I believe, created the template with which all other rock and rollers made their careers in music--has described his songwriting style as geared for young white audiences. Berry was a man raised on the music of Ellington and Louie Jardin, strictly old school stuff, and who considered himself a contemporary of Muddy Waters, but he was also an entrepreneur and an artist. He was a working artist who rethought his brand and created a new one; he created something wholly new, a combination of rhythm and blues, country guitar phrasing, and narratives that wittily, cleverly, indelibly spoke to a collective experience that had not been previously served. Critics and historians have been correct in calling this music Revolutionary. It changed the course of music, but it was also a Career change. All this, though, does not make the power of Berry's music--or the music of Dylan, Beatles, Stones, MC5, Bruce, or The High Fiving White Guys --false, dishonest, sans value altogether. What I concern myself with is how well the musicians are writing, playing, singing on their albums, with whether they are inspired, being fair to middlin', or seem out of ideas, out of breath; it is a useless and vain activity to judge musicians, or whole genres of music by how well they/it align themselves with a metaphysical standard of genuine, real, vital art-making. That standard is unknowable, and those pretending they know what it is are improvising at best.

What matters are the products--sorry, even art pieces, visual, musical, dramatic, poetic, are "product" in the strictest sense of the word--from the artists successful in what they set out to do. The results are subjective, of course, but art is nothing else than means to provoke a response, gentle or strongly, and all grades in between, and critics are useful in that they can make the discussion of artistic efforts interesting. The only criticism that interests are responses from reviewers who are more than consumer guides--criticism, on its own terms, within its limits, criticism can be as brilliant and enthralling as the art itself. And like the art itself, it can also be dull, boring, stupid, pedestrian. The quality of the critics vary; their function to art, however, is valid. It is a legitimate enterprise. Otherwise, we'd be treating artists like they were priests.

Posted by TED BURKE at 10:40 PM
Email ThisBlogThis!Share to TwitterShare to FacebookShare to Pinterest
Labels: AEROSMITH