JEFF BECK IS GOD AFTER ALL

I had been of the recent opinion that what guitarist Jeff Beck has been doing for the last decade was mostly composed of doodling-- short, strange guitar riffs and odd sounds aplenty, but little in the way of interesting guitar work. The July 22nd concert at the  Mattress Firm Amphitheater was another matter altogether; I've had the honor of seeing Beck three times previously; what did that night was a revelation. Fluid, fast, angular, bluesy, full of blues phrasing framed sidewise and in reverse order, tonalities that are from a refined adaptation of Indian classical improvisation, splintered chromaticism, power chords, fusion dynamics and the sweetest lyric playing one would wish for. And yes, lots of funk. All this, of course, with a fine band , including drummer Vinnie Colaiuta (Frank Zappa, Sting, Herbie Hancock), vocalist Jimmy Hall, bassist Rhonda Smith (Prince, Chaka Khan, Beyoncé, George Clinton) and cellist Vanessa Freebairn-Smith, all of whom propelled the guitarist with a tightly conceptualized sense of varying rhythms that propelled the guitarist to what seemed like greater and more inspired outlays of his singular virtuosity as the set wore on. Although not a hyper virtuoso along the lines of Joe Pass or John McLaughlin, two guitarists he clearly admires, Beck has all the same spent the majority of career in a state of perpetual flux, going from one style to the next, from hard rock, blues metal, rockabilly , jazz-rock to increasingly synth-dominated backdrops, and sometimes his playing, in my regard, missed the mark. Always, always, though, he was adding to his armory, changing his style, broadening his understanding of where a solo could go, evolving to his current state of what seems to be a superior style that's all of a piece, without seams, without stitches; grand swaths of bracing electric dissonance intersected superbly with a spare and melodic ad-libbing along a song's main theme. Simple, winsomely stated phrases built into quick-witted crescendos.It was a night was a rich, fluent display of all his 50 years of experiments, investigations, inquiries into all manner of music from around the world. It was fluid, intense, the work of a singular artist at the very top of his form.
______________________________________________________________________ 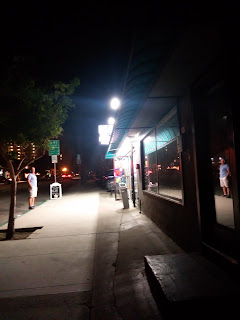 And so this goes: discussing the lack of excitement I feel regarding Jeff Beck's guitar work for the last couple of decades, my associate offers that like Miles Davis, improvisers play slower and use fewer notes doing so. Okay. Davis is another thing altogether, but Beck is certainly not Davis. Of course, he never claimed he was. The notes are usually well executed, but his playing lacks a real sense of spontaneity.It sounds dry, calculated, lifeless in their cold perfection. His solos bring to mind the phrase "wait for it" as he goes through his fabled fingerwork. He makes me think of what John McLaughlin said to me in the Seventies when I asked him after a concert what the thought of Jerry Garcia. "I keep waiting for something to happen," he said,.His answer to my next question threw me.  I asked for his opinion of guitarist Allan Holdsworth. Holdsworth, a fretman who I regard as the Coltrane of electric guitar, speed, melody, amazing register jumping fluidity, madly modulated acceleration, was and remains my favorite guitarist. McLaughlin, who with Larry Coryell jump-started the trend for rock guitarists to take on super speeds, had the view that Holdsworth was cluttering up his improvisations with too many notes,  failing to leave space and to build tension. "You can't sustain beauty with speed alone" was what my friend David Sternbach, a fine poet I knew back in college, He was talking about McLaughlin back in my dorm room days. The point of this digression is just to remark that it is a matter of taste--Christ, I hate that cliche--but at the bottom line I wish Beck would pick up a Les Paul again,  cut his fingernails and use a pick, crank up the distortion and volume  and let the world know what his reputation is based on. I would be very happy if he did another album as good Guitar Shop. So would a lot of people,

___________________________________________________________________________
Jeff Beck: less is less
Jeff Beck is a tiresome guitar player whose penchant for sparse noodling sends too many listeners, seduced by legacy and legend,  into reveries about how "less is more" and the virtues of having a minimal palette of tones. Truth be told, less is merely less and a Jeff Beck performance means there will be huge, gaping spaces in an improvised section, while the guitarist waits for what seems like the random moment to lay another twist to the string. His band, particularly on theLive at Ronnie Scott's album, stays busy while the master awaits is riffing muse, laying down a carpet of funk with a fabric of high-register bass work, minimal drum work, and a variety of ethereal space chords emanating from the keyboards. John Cage had the notion that the audience need to sit in their impatient stews for some periods so they have a chance to listen to their own music (Zen/chance practices in music are more exciting theorized about than experienced firsthand) and the take away for me is that the point of going to a Jeff Beck concert is to confront his reputation and to wait for him to do something interesting. This is what the late critic Steve Esmedina called "boredom as aesthetic effect". Beck, I'm sure, intends other things, and thinks himself akin to Miles Davis, another musician who never burdened his solos with gratuitous technique. Davis, though, could build tension and, when required, fire on all cylinders and make it frantic, exciting, breathe taking. Beck does not do that. Decades go by and endless conversations refer to the genius of Beck and still nothing happens at the address I was given. I understand that and we have, of course, is essentially subjectivities competing for dominance.

The matter isn’t whether Beck can play guitar. As a blues/rock guitarist who first came to American attention during the British invasion of the Sixties with the Yardbirds and later with his string of short-lived (but memorable) ensembles, Beck is a pioneer in matters of extending the vocabulary of an African American vernacular and incorporating elements of funk, jazz, reggae and fusion and rockabilly into his particular mix. He’s recorded quite a bit of music that still makes me turn my head and stare incredulously at the speakers; when he wasn’t being cheap with his playing and willing to lavish more in guitar bravado, his guitar work is of a whole piece. Not just flashy solos, which were, in fact, the least of Beck’s best art, but of control of tone color,  splendidly, tasty fills in the interstices of his band’s alternately rocking or funky fury, attacks, flurries and elongated elaborations on the tremolo bar when your attention was otherwise engaged.  What makes Jeff Beck a great guitarist (when he wants to show off) is that while his compatriots were concentrating on the number of notes they could cram into a twelve-bar or sixteen bar phrase, he did what Miles Davis did with is trumpet after he ventured from the fast, rapid, conspicuously virtuoso inclined sphere of Charlie Parker and Dizzy Gillespie and instead pared back his soloing to what was essential and made musical sense.

While others dominated their songs and performances with fusillades that eventually became a comfortable rut, Beck filled his accorded solo slots with the gift of space, fewer notes, high register bends, and unique tunings. I put forth his first two albums The Jeff Beck Group and Beckola in evidence and will skip ahead to his fusion release Wired and still later Beck’s Guitar Shop as prime examples. That sweet, discerning blend of flash, taste, discretionary speed, off-center attack and an uncanny mastery of electric guitar volume are marvels for future generations to listen to if they wonder what all fuss was about. These weren’t records by an artist still making his reputation. Presently, his reputation is made, his name now a brand, his work too frequently a stylized snore.  Again, I wish Beck would indulge the less savory side of his musical nature and burn a hole in the state no one can leap over.That, though, is part of the fun of discussing musicians and their work. It just seemed to me that Beck has refined his style over the decades to the point that he is drastically essentialist in the tweaking of his playing; all the speedy, distorted, flashier bits are missing in large measure in the interest of a more mature purity, Artists, as they age, do that, but I think Beck's ruthless reappraisal of his chops has, for me, left much of what he's recorded sound empty. I would love to hear Beck rave it up again, to cram a lot of notes into a measure and make them stick, like he used to.
Posted by TED BURKE at 9:27 PM
Email ThisBlogThis!Share to TwitterShare to FacebookShare to Pinterest
Labels: JEFF BECK